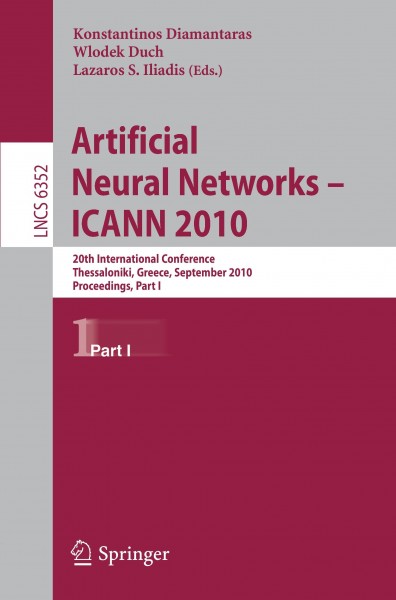 th This volume is part of the three-volume proceedings of the 20 International Conference on Arti?cial Neural Networks (ICANN 2010) that was held in Th- saloniki, Greece during September 15-18, 2010. ICANN is an annual meeting sponsored by the European Neural Network Society (ENNS) in cooperation with the International Neural Network So- ety (INNS) and the Japanese Neural Network Society (JNNS). This series of conferences has been held annually since 1991 in Europe, covering the ?eld of neurocomputing, learning systems and other related areas. As in the past 19 events, ICANN 2010 provided a distinguished, lively and interdisciplinary discussion forum for researches and scientists from around the globe. Ito?eredagoodchanceto discussthe latestadvancesofresearchandalso all the developments and applications in the area of Arti?cial Neural Networks (ANNs). ANNs provide an information processing structure inspired by biolo- cal nervous systems and they consist of a large number of highly interconnected processing elements (neurons). Each neuron is a simple processor with a limited computing capacity typically restricted to a rule for combining input signals (utilizing an activation function) in order to calculate the output one. Output signalsmaybesenttootherunitsalongconnectionsknownasweightsthatexcite or inhibit the signal being communicated. ANNs have the ability "to learn" by example (a large volume of cases) through several iterations without requiring a priori ?xed knowledge of the relationships between process parameters. von Diamantaras, Konstantinos und Iliadis, Lazaros S. und Duch, Wlodek