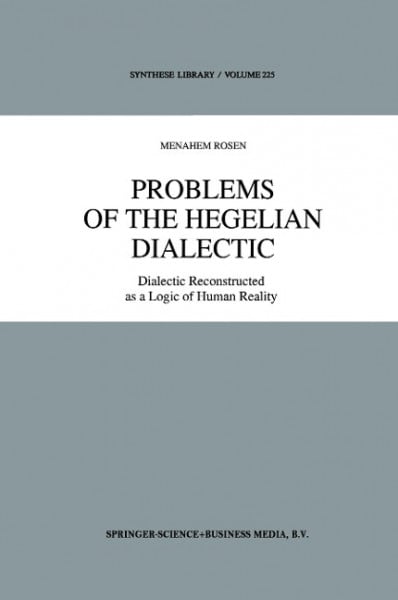 Problems of the Hegelian Dialectic

In this book, I deal with some fundamental problems of the Hegelian dialectic. For this purpose, I take a middle course between total scepticism, which considers dialectic as a devastator sophistry with no respect even for the non-contradiction principle, and authoritarian dogmatism, which claims to solve any question with the magic wand of the Hegelian Aufhebung. That is, I decide to be critical, defining concepts anew, bringing out sources, determining conditions of possibility and fields of validity, accepting or rejecting when necessary. Following G. R. G. Mure's thinking, from an inner point of view I examine whether, in carrying out his work, Hegel remains faithful to the different principles he proclaims, and I find substantial deviations. And, following W. Becker's thinking, from an external point of view, that is, from a formal, empirical or existential contemporary angle, I try to determine the extent to which we may legitimately talk about the fruitfulness of Hegelian dialectic. In this way, I reconstruct Hegel's thought so that it may become acceptable to us-readers of the twentieth-century-as intelligible and coherent as possible. I conclude that dialectic, as a logic of human reality, has to be grasped and expressed from the viewpoint of the particular historical individual, in constant interaction with the cultural environment of his or her time. Using this approach, I investigate the questions at issue from Hegel's Logic point of view. von Rosen, M.