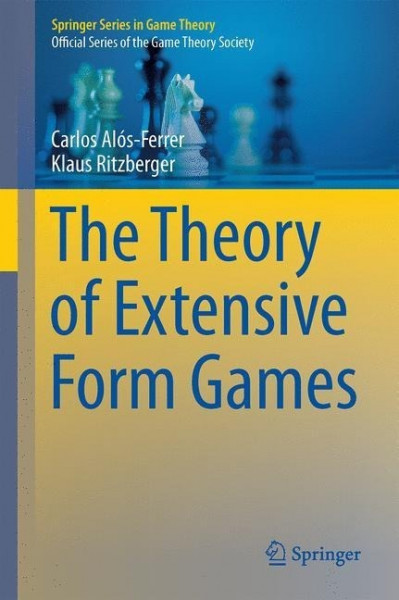 The Theory of Extensive Form Games

The Theory of Extensive Form Games

This book treats extensive form game theory in full generality. It provides a framework that does not rely on any finiteness assumptions at all, yet covers the finite case. The presentation starts by identifying the appropriate concept of a game tree. This concept represents a synthesis of earlier approaches, including the graph-theoretical and the decision-theoretical ones. It then provides a general model of sequential, interpersonal decision making, called extensive decision problems. Extensive forms are a special case thereof, which is such that all strategy profiles induce outcomes and do so uniquely. Requiring the existence of immediate predecessors yields discrete extensive forms, which are still general enough to cover almost all applications. The treatment culminates in a characterization of the topologies on the plays of the game tree that admit equilibrium analysis. von Alós-Ferrer, Carlos und Ritzberger, Klaus

Carlos Alós-Ferrer graduated in Mathematics at the University of Valencia (Spain) in 1992 and completed his Ph.D. in Economics at the University of Alicante (Spain) in 1998. He is a Full Professor of Microeconomics at the University of Cologne (Germany), and has previously worked at the Universities of Alicante (Spain), Vienna (Austria), Salamanca (Spain), and Konstanz (Germany). Since 2012, he is the speaker of the interdisciplinary Research Unit "Psychoeconomics" of the German Research Foundation. His specializations are in game theory, mathematical economics, and behavioral microeconomics (both theoretical and experimental), and he also works and publishes in psychology and neuroscience. Klaus Ritzberger graduated in Economics at the University of Vienna (Austria) in 1982 and completed his Ph.D. at the same university in 1987. He has been at the Institute for Advanced Studies (IHS) in Vienna for about thirty years, with intermissions abroad. He has been chairman of the Department of Economics and Finance for seven years and then became Lead Economist. He is a faculty member of the Vienna Graduate School of Finance (VGSF) since its foundation. His specializations are in game theory, financial economics, microeconomics, and general equilibrium theory.