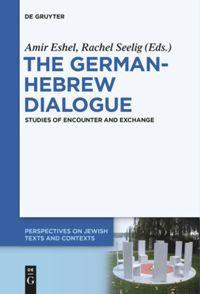 The German-Hebrew Dialogue
Studies of Encounter and Exchange

In the wake of World War II and the Holocaust, it seemed there was no place for German in Israel and no trace of Hebrew in Germany - the two languages and their cultures appeared as divergent as the directions of their scripts. Yet when placed side by side on opposing pages, German and Hebrew converge in the middle. Comprised of essays on literature, history, philosophy, and the visual and performing arts, this volume explores the mutual influence of two linguistic cultures long held as separate or even as diametrically opposed. From Moses Mendelssohn's arrival in Berlin in 1748 to the recent wave of Israeli migration to Berlin, the essays gathered here shed new light on the painful yet productive relationship between modern German and Hebrew cultures. von Eshel, Amir