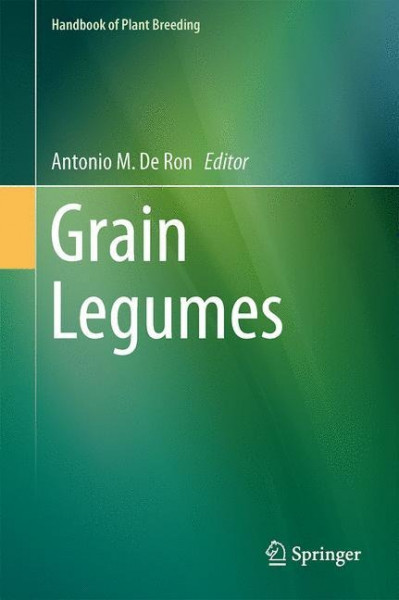 ¿¿¿This book is devoted to grain legumes and include eight chapters devoted to the breeding of specific grain legume crops and five general chapters dealing with important topics which are common to most of the species in focus. Soybean is not included in the book as it is commonly considered an oil crop more than a grain legume and is included in the Oil Crops Volume of the Handbook of Plant Breeding.¿Legume species belong to the Fabaceae family and are characterized by their fruit, usually called pod. Several species of this family were domesticated by humans, such as soybean, common bean, faba bean, pea, chickpea, lentil, peanut, or cowpea. Some of these species are of great relevance as human and animal food. Food legumes are consumed either by their immature pod or their dry seeds, which have a high protein content. Globally, grain legumes are the most relevant source of plant protein, especially in many countries of Africa and Latin America, but there are some constraints in their production, such as a poor adaptation, pest and diseases and unstable yield. Current research trends in Legumes are focused on new methodologies involving genetic and omic studies, as well as new approaches to the genetic improvement of these species, including the relationships with their symbiotic rhizobia. von Ron, Antonio M. de

Antonio M. De Ron is Research Professor at the Misión Biológica de Galicia (MBG), Spanish National Research Council (CSIC) in Pontevedra, Spain. He received both his graduate and doctorate in Biology from the University of Santiago de Compostela (USC, Spain). Initially he worked as a postgraduate student in plant protection at the National Institute for Agricultural Research (INIA, Spain). In 1988, Prof De Ron gained a staff position as scientist at the MBG working on legume genetics, germplasm and breeding and he is currently the leader of the Biology of Agrosystems Research Group. He was also part-time lecturer of genetics and breeding at the USC. Currently he is also serving as Leader of the Protein Crops Working Group of the European Association for Research on Plant Breeding (EUCARPIA, The Netherlands). He has published many scientific articles, books and monographs, as well as several educational publications. Prof De Ron has won awards for his work and is well recognized in the international scientific community for his achievements.