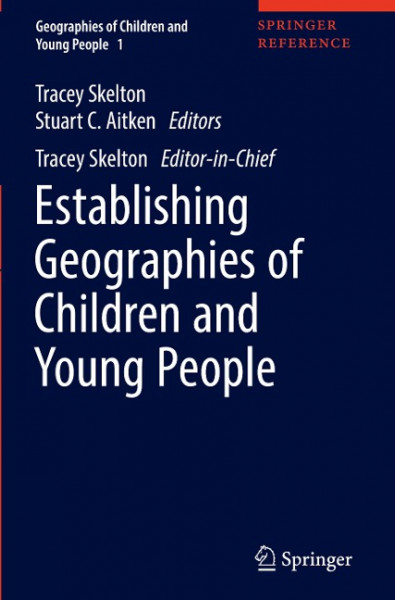 Children¿s and young people¿s geographies is one of the most recent sub-disciplines within human geography. It has rapidly developed to a level of critical mass which includes established academic work, key names within academia, growing numbers of graduate students, expanding numbers of university level taught courses, as well as national and international training programmes focusing on younger people. In addition to the journal Children¿s Geographies, all the major academic presses have published monographs, textbooks and edited collections focusing on children and young people. However, the largest international collection of scholarly work on geographies of children and young people is now available through the Springer Major Reference Work, Geographies of Children and Young People. This edited collection comprises twelve volumes containing almost 300 chapters. The volumes and sections are structured by themes, which reflect the broader geographical debates, geographical diversity, and scholarly expertise of 24 editors and chapter contributors. von Aitken, Stuart C. und Skelton, Tracey

Tracey Skelton is Associate Professor of Human Geography in the Department of Geography at the National University of Singapore. She was previously Professor of Critical Geographies at the University of Loughborough in the UK. The essential elements of her research career focus on people who are socially, politically, and intellectually excluded. Her early work focused on the Caribbean and issues of gender and racial inequality, feminist geographies, and methodological analysis. She has contributed to culture and development debates, particularly through her longitudinal research on the island of Montserrat. Recently, A/P Skelton returned to this field of scholarship through research with volunteers and host organizations in Cambodia as part of a major comparative and collaborative project on development partnerships. She was the principal investigator of a major comparative urbanism research project on the livability, sustainability, and diversity of four Asian cities: Busan in South Korea, Hyderabad in India, Kunming in China, and Singapore. A/P Skelton is a recognized international leader in the subdiscipline of children's and young people's geographies. In particular, her work has served to challenge the invisibility and marginalization of young people from geographic academic research at the same time as it has demonstrated the rich and varied ways in which young people live their lives both spatially and temporally alongside, but differently from, adults. Her research work has been funded by key research institutions such as the Economic and Social Research Council and the Arts and Humanities Research Council of the UK; the Faculty of Arts and Social Science Academic Research Fund and the Global Asia Institute, both of the National University of Singapore; the Australian Research Council; and the Social Science and Humanities Research Council of Canada. A/P Skelton was a founding editorial board member of the international journal Children's Geographies and has been the Viewpoints Editor since 2005 and became the Commissioning Editor for Asia in 2010. She is on the editorial boards of the following journals: Geoforum; the Singapore Journal of Tropical Geography; and Geography Compass. She has coauthored 2 books, edited 5 collections, guest-edited 2 special issues, and 2 special sections, and published more than 95 journal articles and chapters. She is a passionate teacher and graduate supervisor. She is committed to the politics of research dissemination in accessible formats, in particular to enable the participants in her research projects to understand and recognize their coproduction of knowledge whether through specialized small-scale workshops, translation of reports into local languages, or production of audiovisual materials.Dr. Stuart C. Aitken is June Burnett Chair and Distinguished Professor of Geography at San Diego State University, and Director of the research center Youth, Environment, Society and Space (YESS). His research interests include critical social theory, qualitative methods, film, children, families and communities, child rights, and youth activism. Stuart has worked with the UN on qualitative methods, child rights, and labor and migration issues. His previous books include Young People, Rights and Place (Routledge, 2018), The Ethnopoetics of Space: Young People's Engagement, Activism and Aesthetics (Ashgate, 2016), The Fight to Stay Put (Steiner Verlag, 2013), Young People, Border Spaces and Revolutionary Imaginations (Routledge, 2011), Qualitative Geographies (Sage, 2010), The Awkward Spaces of Fathering (Ashgate, 2009), Global Childhoods (Routledge, 2008), Geographies of Young People (Routledge, 2001), Family Fantasies and Community Space (Rutgers University Press, 1998), and Place, Space, Situation and Spectacle (Rowman and Littlefield, 1994). He has published over 250 research papers, essays, and reviews in academic journals as well as in various edited book collections and encyclopedias. Stuart is past coeditor of The Professional Geographer and Children's Geographies.