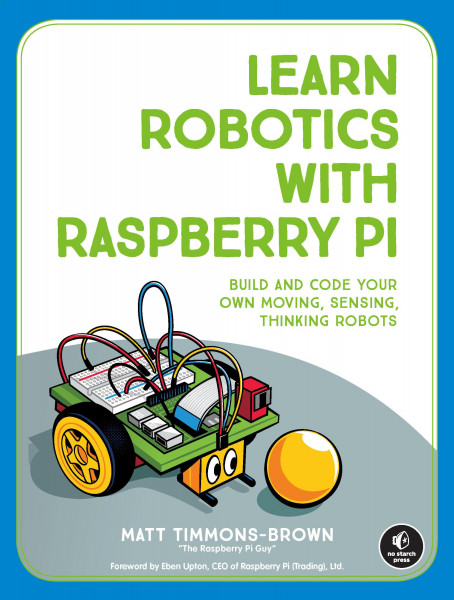 In Learn Robotics with Raspberry Pi, you'll learn how to build and code your own robot projects with just the Raspberry Pi microcomputer and a few easy-to-get components - no prior experience necessary!Learn Robotics with Raspberry Pi will take you from inexperienced maker to robot builder. You'll start off building a two-wheeled robot powered by a Raspberry Pi minicomputer and then program it using Python, the world's most popular programming language. Gradually, you'll improve your robot by adding increasingly advanced functionality until it can follow lines, avoid obstacles, and even recognize objects of a certain size and color using computer vision. Learn how to:- Control your robot remotely using only a Wii remote- Teach your robot to use sensors to avoid obstacles- Program your robot to follow a line autonomously - Customize your robot with LEDs and speakers to make it light up and play sounds- See what your robot sees with a Pi CameraAs you work through the book, you'll learn fundamental electronics skills like how to wire up parts, use resistors and regulators, and determine how much power your robot needs. By the end, you'll have learned the basics of coding in Python and know enough about working with hardware like LEDs, motors, and sensors to expand your creations beyond simple robots. von Timmons-Brown, Matt

Matt Timmons-Brown is the creator of the world's most-popular Raspberry Pi YouTube channel: The Raspberry Pi Guy. Here, he makes Raspberry Pi tutorials, videos and other educational materials for the community to enjoy and use. Started in 2012, Matt's channel now has over 5 million views and is directly supported by ARM and the Raspberry Pi Foundation. He studies Computer Science at the University of Edinburgh, and comes from Cambridge, UK.