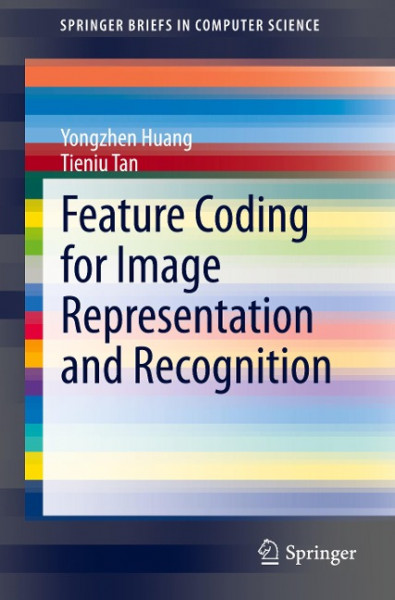 This brief presents a comprehensive introduction to feature coding, which serves as a key module for the typical object recognition pipeline. The text offers a rich blend of theory and practice while reflects the recent developments on feature coding, covering the following five aspects: (1) Review the state-of-the-art, analyzing the motivations and mathematical representations of various feature coding methods; (2) Explore how various feature coding algorithms evolve along years; (3) Summarize the main characteristics of typical feature coding algorithms and categorize them accordingly; (4) Discuss the applications of feature coding in different visual tasks, analyze the influence of some key factors in feature coding with intensive experimental studies; (5) Provide the suggestions of how to apply different feature coding methods and forecast the potential directions for future work on the topic. It is suitable for students, researchers, practitioners interested in object recognition. von Huang, Yongzhen und Tan, Tieni

Yongzhen Huang received his B.E. degree from Huazhong University of Science and Technology in 2006 and his Ph.D. degree from Institute of Automation, Chinese Academy of Sciences (CASIA) in 2011. In July 2011, he joined the National Laboratory of Pattern Recognition (NLPR), CASIA, where he is currently an Associate Professor. He has published more than 30 papers in the areas of computer vision and pattern recognition at international journals and conferences such as IEEE TPAMI, TSMC-B, CVPR, NIPS, ICPR and ICIP. In 2010 and 2011, he and this team won the champion of the PASCAL VOC competition on object detection, and their system of object classification was ranked the 2ndin 2011. His current research interests include pattern recognition, computer vision and machine learning.Tieniu Tan received his BSc degree from Xi'an Jiaotong University, China, in 1984 and his MSc and PhD degrees from the Imperial College of Science, Technology and Medicine, London, in 1986 and 1989, respectively. In 1989, he joined the Computational Vision Group, Department of Computer Science, University of Reading, United Kingdom, where he worked as a research fellow, a senior research fellow, and a lecturer. In 1998, he joined the National Laboratory of Pattern Recognition (NLPR), Institute of Automation, Chinese Academy of Sciences (CASIA) in Beijing, where he is currently a Professor and the Director of the Center for Research on Intelligent Perception and Computing (CRIPAC). Prof. Tan has co-authored and edited multiple books with Springer, and has published more than 300 research papers in refereed journals and conference proceedings in the areas of image processing, computer vision, and pattern recognition. His current research interests include biometrics, image and video understanding, information hiding, and information forensics. He is the first vice president of the Inter. Assoc. for Pattern Recognition (IAPR) and a founding chair of the IAPR/IEEE International Conference on Biometrics (ICB) and the IEEE International Workshop on Visual Surveillance. He is a fellow of the IEEE and the IAPR, and an academician of the Chinese Academy of Sciences.