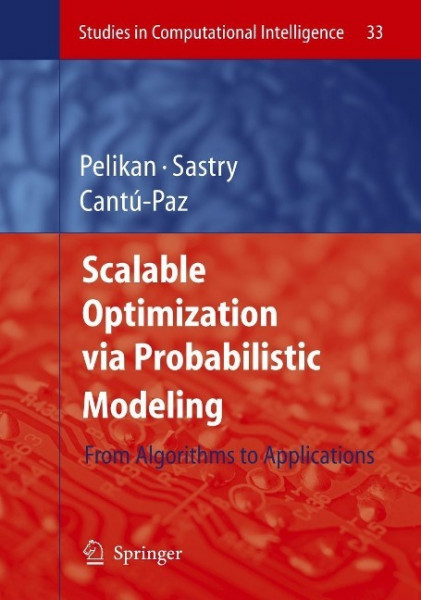 Scalable Optimization via Probabilistic Modeling
From Algorithms to Applications

I'm not usually a fan of edited volumes. Too often they are an incoherent hodgepodge of remnants, renegades, or rejects foisted upon an unsuspecting reading public under a misleading or fraudulent title. The volume Scalable Optimization via Probabilistic Modeling: From Algorithms to Applications is a worthy addition to your library because it succeeds on exactly those dimensions where so many edited volumes fail. For example, take the title, Scalable Optimization via Probabilistic M- eling: From Algorithms to Applications. You need not worry that you're going to pick up this book and ?nd stray articles about anything else. This book focuseslikealaserbeamononeofthehottesttopicsinevolutionary compu- tion over the last decade or so: estimation of distribution algorithms (EDAs). EDAs borrow evolutionary computation's population orientation and sel- tionism and throw out the genetics to give us a hybrid of substantial power, elegance, and extensibility. The article sequencing in most edited volumes is hard to understand, but from the get go the editors of this volume have assembled a set of articles sequenced in a logical fashion. The book moves from design to e?ciency enhancement and then concludes with relevant applications. The emphasis on e?ciency enhancement is particularly important, because the data-mining perspectiveimplicitinEDAsopensuptheworldofoptimizationtonewme- ods of data-guided adaptation that can further speed solutions through the construction and utilization of e?ective surrogates, hybrids, and parallel and temporal decompositions. von Pelikan, Martin und Sastry, Kumara und Cantu-Paz, Erick