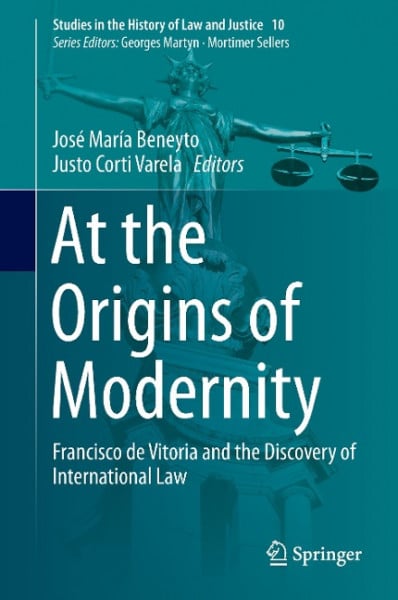 At the Origins of Modernity

This book is based on an international project conducted by the Institute for European Studies of the University CEU San Pablo in Madrid and a seminar on Vitoria and International Law which took place on July 2nd 2015 in the convent of San Esteban, the place where Vitoria spent his most productive years as Chair of Theology at the University of Salamanca.  It argues that Vitoria not only lived at a time bridging the Middle Ages and Modernity, but also that his thoughts went beyond the times he lived in, giving us inspiration for meeting current challenges that could also be described as "modern" or even post-modern.There has been renewed interest in Francisco de Vitoria in the last few years, and he is now at the centre of a debate on such central international topics as political modernity, colonialism, the discovery of the "Other" and the legitimation of military interventions. All these subjects include Vitoria's contributions to the formation of the idea of modernity and modern international law.The book explores two concepts of modernity: one referring to the post-medieval ages and the other to our times. It discusses the connections between the challenges that the New World posed for XVIth century thinkers and those that we are currently facing, for example those related to the cyberworld. It also addresses the idea of international law and the legitimation of the use of force, two concepts that are at the core of Vitoria's texts, in the context of "modern" problems related to a multipolar world and the war against terrorism. This is not a historical book on Vitoria, but a very current one that argues the value of Vitoria's reflections for contemporary issues of international law. von Beneyto, José María und Corti Varela, Justo