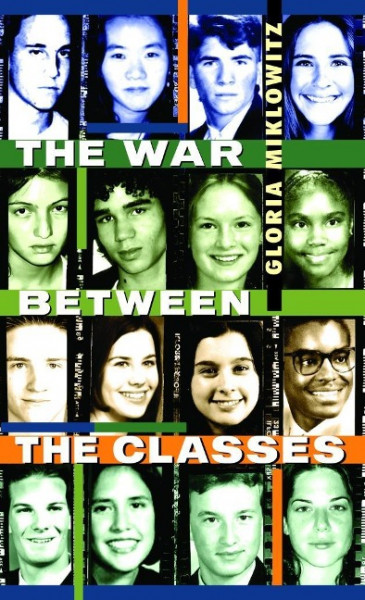 The War Between the Classes

The War Between the Classes

What are Amy and Adam going to do about their love life? Neither Amy's traditionalist Japanese parents nor Adam's snobby, upper-class mother will accept their relationship. To make things worse, Amy and Adam are involved in the "color game" at school, an experiment that's designed to make students aware of class and racial prejudices.Now the experiment threatens to alienate Amy from her friends and tear her apart from Adam. She knows it's time to rebel against the color game. But will the rest of the class follow her lead? von Miklowitz, Gloria

Gloria D. Miklowitz is the author of over 60 fiction and nonfiction books for children and young adults. Her books have won national and international awards and deal with important issues such as racial injustice, steroid abuse, date violence and militia involvement. Three of her novels were made into award-winning television specials, including one which won the Emmy for "Best Children's Special" in 1985 (The War Between the Classes). A frequent speaker at schools, Ms. Miklowitz has also taken part in conferences in the United States, South Africa and Sweden.After graduating from the University of Michigan, Miklowitz married and moved to California where she became a script writer of documentary films on rockets and torpedoes for the Navy Department. Her husband, a scientist, became Professor of Engineering at the California Institute of Technology in Pasadena. When her second son was born she left her job and began writing for children, entering a manuscript in a national contest and selling her first book.As her children grew older she wrote for middle grades and then young adults. More than half her published books are for the older reader. She says, "I write because I like to try on different lives through my characters and want to help young people find answers to their problems."A widow, Ms. Miklowitz lives in La Canada, California. Her two sons are college professors of Philosophy and Psychology. All four Miklowitzes have books in print and one granddaughter is now trying her hand at being a writer.For more biographical information see www.authors4teens.com and the 17th edition of Something About the Author Autobiography Series, pp 225-241.Most Recent Books: The Enemy Has a Face. Eerdmans. Spring '03Secrets in the House of Delgardo. Eerdmans 2001Masada, the Last Fortress. Eerdmans. 1999Camouflage. Harcourt Brace. 1998Past Forgiving. Simon & Schuster. 1995The Killing Boy. Bantam Books. 1993