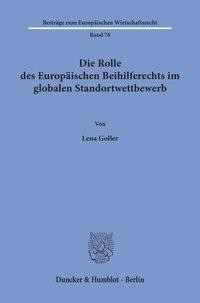 »European State Aid Law and the Global Competition among Localities« Locations all over the world use location incentives to attract companies to their location. In the European Union, the granting of such subsidies is regulated by European state aid law. In this context, the control system is often described as a threat to Europe as a business location. In that respect this doctoral thesis examines the similarities and differences between the existing international subsidy control systems and the national subsidy law of the USA. von Goller, Lena