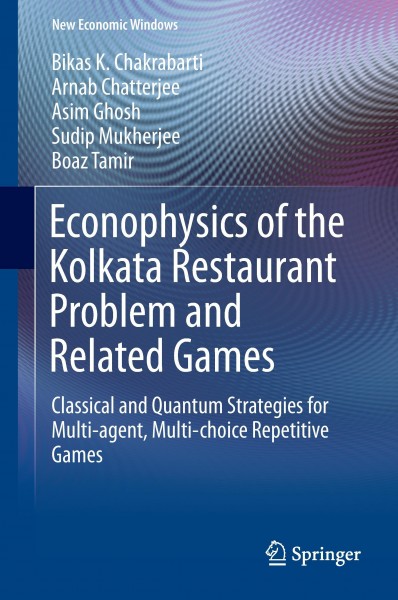 Econophysics of the Kolkata Restaurant Problem and Related Games

This book provides the first comprehensive introduction to multi-agent, multi-choice repetitive games, such as the Kolkata Restaurant Problem and the Minority Game. It explains how the tangible formulations of these games, using stochastic strategies developed by statistical physicists employing both classical and quantum physics, have led to very efficient solutions to the problems posed. Further, it includes sufficient introductory notes on information-processing strategies employing both classical statistical physics and quantum mechanics. Games of this nature, in which agents are presented with choices, from among which their goal is to make the minority choice, offer effective means of modeling herd behavior and market dynamics and are highly relevant to assessing systemic risk. Accordingly, this book will be of interest to economists, physicists, and computer scientists alike. von Chakrabarti, Bikas K. und Chatterjee, Arnab und Ghosh, Asim und Mukherjee, Sudip und Tamir, Boaz

Bikas K. Chakrabarti of Saha Institute of Nuclear Physics, Kolkata, India is a Professor of Theoretical Condensed Matter Physics at the Saha Institute of Nuclear Physics and a Visiting Professor of Economics at the Indian Statistical Institute. He has research interests in statistical physics, condensed matter physics, computational physics, and econophysics. He is a Shanti Swarup Bhatnagar awardee and a fellow of the Indian National Science Academy and Indian Academy of Sciences, and he has received the Outstanding Referee award of the American Physical Society. He has coauthored books published by Cambridge University Press, Oxford University Press, Springer, Wiley, etc. Arnab Chatterjee is a Research Scientist at the TCS Innovation Lab., New Delhi, India. He received his PhD from Jadavpur University in 2008. He has held postdoctoral positions at the International Centre for Theoretical Physics (Trieste, Italy), Centre de Physique Théorique (Marseille, France), Institute for Scientific Interchange (Turin, Italy), and Aalto University (Espoo, Finland). He was also a Visiting Scientist at the Saha Institute of Nuclear Physics, Kolkata, India. He has coauthored two books, published by Cambridge University Press and Wiley. He has extensive research experience in statistical physics and complex systems, complex networks, and socioeconomic systems in general. Asim Ghosh has been a post-doctoral fellow at the Aalto University, Espoo, Finland, working on Sociophysics and Econophysics. His permanent address is Department of Physics, Raghunathpur College, Purulia 723133, India. He obtained his PhD in 2014 from Calcutta University and has extensive research experience in statistical physics of markets and society, and in particular on the Kolkata Restaurant Problem and the Minority Game using classical tricks. Sudip Mukherjee of Barasat Government College, Barasat, India holds a Masters degree in Physics from the University of Calcutta. He is a research fellow at Saha Institute of Nuclear Physics, Kolkata and works on quantum spin glasses. Boaz Tamir of the Faculty of Interdisciplinary Studies, Bar-Ilan University, Ramat Gan, Israel, holds a PhD from the Department of Mathematics of the Weizmann Institute of Science for his work on representation of unitary algebraic groups over p-adic fields and a PhD from Bar-Ilan University for his work on quantum simulation and quantum computation. During the last few years he has published several papers on representations of groups, quantum algorithms, quantum information, bio-information, and philosophy of science. He is currently working on algorithmic methods for community detection in social networks.