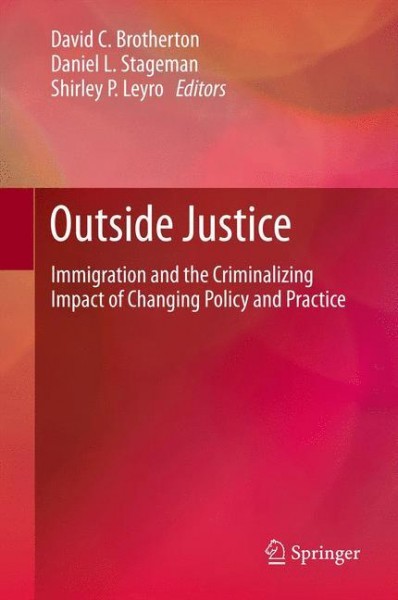 Outside Justice: Undocumented Immigrants and the Criminal Justice System fills a clear gap in the scholarly literature on the increasing conceptual overlap between popular perceptions of immigration and criminality, and its reflection in the increasing practical overlap between criminal justice and immigration control systems.  Drawing on data from the United States and other nations, scholars from a range of academic disciplines examine the impact of these trends on the institutions, communities, and individuals that are experiencing them.  Individual entries address criminal victimization and labor exploitation of undocumented immigrant communities, the effects of parental detention and deportation on children remaining in destination countries, relations between immigrant communities and law enforcement agencies, and the responses of law enforcement agencies to drastic changes in immigration policy, among other topics. Taken as a whole, these essays chart the ongoing progression of social forces that will determine the well-being of Western democracies throughout the 21st century.  In doing so, they set forth a research agenda for reexamining and challenging the goals of converging criminal justice and immigration control policy, and raise a number of carefully considered, ethical alternatives to the contemporary policy status quo.¿¿Contemporary immigration is the focus of highly charged rhetoric and policy innovation, both attempting to define the movement of people across national borders as fundamentally an issue of criminal justice.  This realignment has had profound effects on criminal justice policy and practice and immigration control alike, and raises far-reaching implications for social inclusion, labor economies, community cohesion, and a host of other areas of immediate interest to social science researchers and practitioners.  von Brotherton, David C und Leyro, Shirley P und Stageman, Daniel L