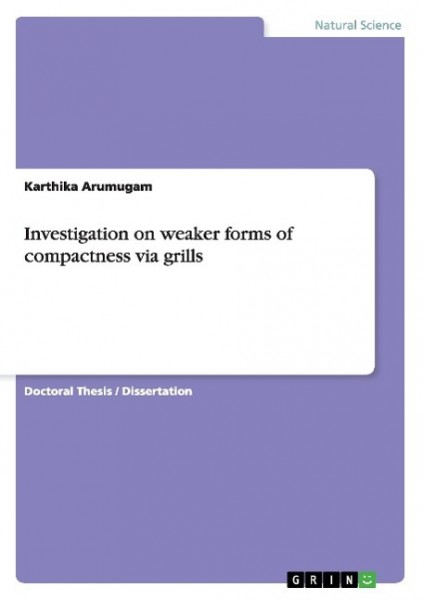 Investigation on weaker forms of compactness via grills

Investigation on weaker forms of compactness via grills

Doctoral Thesis / Dissertation from the year 2013 in the subject Mathematics - Miscellaneous, , course: P.Hd, language: English, abstract: Topology is a silent inducer and a strong trend setter as it is a fundamental field in mathematics. It provides many basic concepts for modern analysis, hence many Mathematicians and Scientists apply the concept of Topology to understand the real world phenomena.The three basic foundations in topology are general Topology, Algebraic Topology and Differential Topology. Grills, which is the main focus of this thesis comes under the head of general Topology. The idea of grills was introduced by Choquet in 1947. It is observed from the literature that the concept of grills is a powerful, supporting tool like nets and filters. B.Roy and M.N.Mukherjee developed the topology induced by grills. Further they proposed the definition of compactness through grills in and extended their study to fuzzy grill topology.Fuzzy set was introduced by Zadeh. Fuzzy topology was initiated by Chang and it paved a way for a new era of fuzzy topology. Several researchers conducted on the generalizations of the notion of fuzzy topology. The intuitionistic fuzzy set was first published by K.Atanassov. Later topological structures in fuzzy topological spaces is generalized to " Intuitionistic fuzzy topological spaces" by Coker in. Athar and Ahmad defined the notion of fuzzy boundary in FTS and studied the properties of fuzzy semi boundary. [...] von Arumugam, Karthika