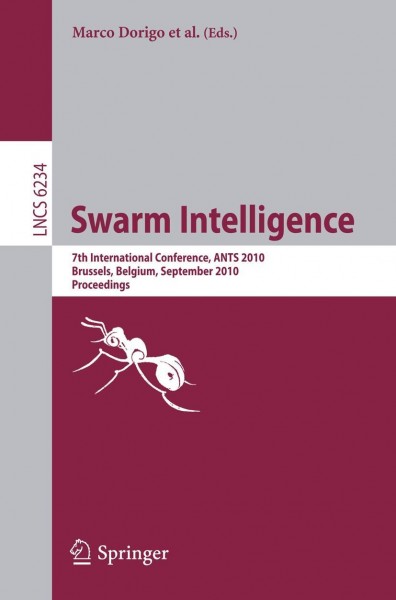 These proceedings contain the papers presented at ANTS 2010, the 7th Int- national Conference on Swarm Intelligence, organized by IRIDIA, CoDE, U- versitéLibre de Bruxelles,Brussels, Belgium, during September 8-10,2010.The ANTS series started in 1998 with the First International Workshop on Ant Colony Optimization (ANTS 1998), which attracted more than 50 participants. Since then ANTS, which is held bi-annually, has gradually become an inter- tional forum for researchers in the wider ?eld of swarm intelligence. In the past (since 2004), this development has been acknowledged by the inclusion of the term"SwarmIntelligence" (nextto"AntColonyOptimization")intheconference title. This year's ANTS conference was o?cially devoted to the ?eld of swarm intelligence as a whole, without any bias towards speci?c research directions. As a result, the title of the conference was changed to "The International Conf- ence on SwarmIntelligence." This name change is already in place this year,and future ANTS conferences will continue to use the new title. Thisvolumecontainsthebestpapersselectedoutof99submissions.Ofthese, 28 were accepted as full-length papers, while 27 were accepted as short papers. This corresponds to an overall acceptance rate of 56%. Also included in this volume are 14 extended abstracts. Of the full-length papers, 15 were selected for oral presentation at the c- ference. All other contributions, including short papers and extended abstracts, werepresentedin the formof poster presentations.Following the conference,the journal Swarm Intelligence will publish extended versions of some of the best papers presented at the conference. von Dorigo, Marco und Birattari, Mauro und Di Caro, Gianni A. und Doursat, René und Engelbrecht, Andries P. und Floreano, Dario