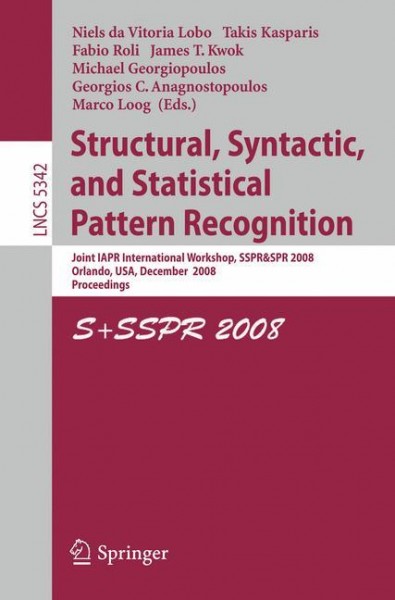 This volume in the Springer Lecture Notes in Computer Science (LNCS) series contains 98 papers presented at the S+SSPR 2008 workshops. S+SSPR 2008 was the sixth time that the SPR and SSPR workshops organized by Technical Committees, TC1 and TC2, of the International Association for Pattern Rec- nition (IAPR) wereheld as joint workshops. S+SSPR 2008was held in Orlando, Florida, the family entertainment capital of the world, on the beautiful campus of the University of Central Florida, one of the up and coming metropolitan universities in the USA. S+SSPR 2008 was held during December 4-6, 2008 only a few days before the 19th International Conference on Pattern Recog- tion(ICPR2008),whichwasheldin Tampa,onlytwo hoursawayfromOrlando, thus giving the opportunity of both conferences to attendees to enjoy the many attractions o?ered by two neighboring cities in the state of Florida. SPR 2008 and SSPR 2008 received a total of 175 paper submissions from many di?erent countries around the world, thus giving the workshop an int- national clout, as was the case for past workshops. This volume contains 98 accepted papers: 56 for oral presentations and 42 for poster presentations. In addition to parallel oral sessions for SPR and SSPR, there was also one joint oral session with papers of interest to both the SPR and SSPR communities. A recent trend that has emerged in the pattern recognition and machine lea- ing research communities is the study of graph-based methods that integrate statistical andstructural approaches. von Da Vitoria Lobo, Niels und Kasparis, Takis und Roli, Fabio und Kwik, James T. und Georgiopoulos, Michael und Anagnostopoulos, Georgios C.