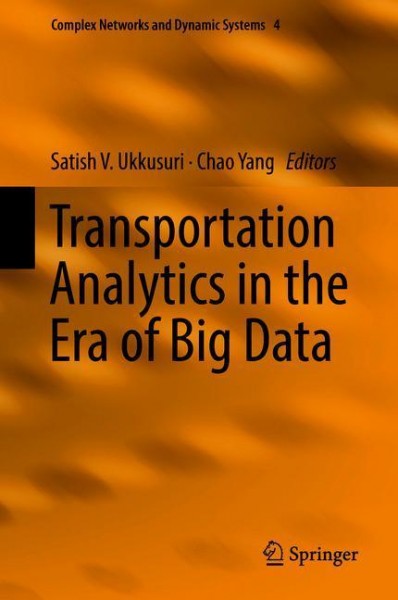 Transportation Analytics in the Era of Big Data

Transportation Analytics in the Era of Big Data

This book presents papers based on the presentations and discussions at the international workshop on Big Data Smart Transportation Analytics held July 16 and 17, 2016 at Tongji University in Shanghai and chaired by Professors Ukkusuri and Yang. The book is intended to explore a multidisciplinary perspective to big data science in urban transportation, motivated by three critical observations:The rapid advances in the observability of assets, platforms for matching supply and demand, thereby allowing sharing networks previously unimaginable.The nearly universal agreement that data from multiple sources, such as cell phones, social media, taxis and transit systems can allow an understanding of infrastructure systems that is critically important to both quality of life and successful economic competition at the global, national, regional, and local levels.There is presently a lack of unifying principles and methodologies that approach big data urban systems.The workshop brought together varied perspectives from engineering, computational scientists, state and central government, social scientists, physicists, and network science experts to develop a unifying set of research challenges and methodologies that are likely to impact infrastructure systems with a particular focus on transportation issues. The book deals with the emerging topic of data science for cities, a central topic in the last five years that is expected to become critical in academia, industry, and the government in the future. There is currently limited literature for researchers to know the opportunities and state of the art in this emerging area, so this book fills a gap by synthesizing the state of the art from various scholars and help identify new research directions for further study. von Ukkusuri, Satish und Yang, Chao

Satish V. Ukkusuri is a professor in the Lyles School of Civil Engineering, Director of the Integrative Data Driven Transportation Networks Lab and Co-lead of the Sustainable Communities Cluster at Purdue University. His research is in the area of interdisciplinary transportation networks with current interests in data driven mobility solutions, disaster management, resilience of interdependent networks, connected and autonomous traffic systems, shared mobility platforms, dynamic traffic networks and smart logistics. He is a University Faculty Scholar (2017-present), Fulbright Fellow (2015-16), Discovery Park Fellow (2013-15), a selectee of the National Academy of Engineering (NAE) JAFOE conference (2016), a selectee of the National Academy of Science (NAS) Arab American Frontiers of Science, Engineering and Medicine in 2017 and a CUTC/ARTBA Faculty Award (2011) among other awards both nationally and at Purdue. He has published more than 250 peer reviewed journal and conference articles. He is an Area Editor of Networks and Spatial Economics and an Academic Editor of PLOS One among other editorial duties. He is a member of several national and international committees, including the TRB's Freight Logistics and Planning Committee, Emergency Evacuation Modeling Committee and a past member of the Network Modeling Committee. Chao Yang is a Professor of Transportation Engineering at Tongji University in Shanghai, China. He has been committed to studies in the areas of big data mining, transportation planning theory, network traffic flow analysis, and traffic behavior analysis. He earned his Ph.D. degree in Municipal Engineering from Tongji University in 1999. He worked as Research Assistant at the Department of Civil Engineering in the University of Hong Kong (1998-1999), Research Fellow at the Department of Civil and Environmental Engineering in Nanyang Technological University (1999-2002), and postdoctoral scholar at the Department of Civil and Environmental Engineering in Utah State University (2002-2004). He has been working at the College of Transportation Engineering in Tongji University from 2005 to the present. He was the leader of two projects supported by the National Natural Science Foundation and one supported by the 863 Program. He has published almost 200 papers in several prestigious international journals in transportation studies, out of which 28 papers are indexed by SCI and cited for 294 times.