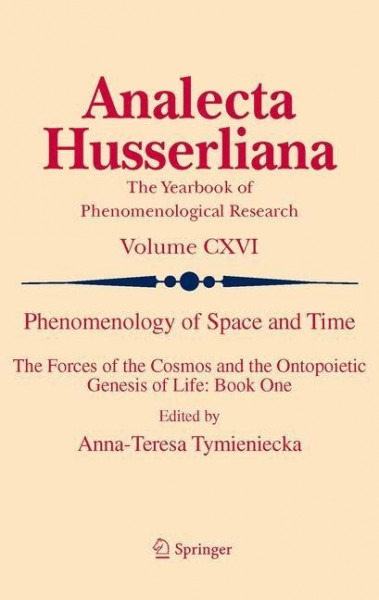 Phenomenology of Space and Time

Phenomenology of Space and Time
Book 1. The Forces of the Cosmos and the Ontopoietic Genesis of Life

This book celebrates the investigative power of phenomenology to explore the phenomenological sense of space and time in conjunction with the phenomenology of intentionality, the invisible, the sacred, and the mystical. It examines the course of life through its ontopoietic genesis, opening the cosmic sphere to logos. The work also explores, on the one hand, the intellectual drive to locate our cosmic position in the universe and, on the other, the pull toward the infinite. It intertwines science and its grounding principles with imagination in order to make sense of the infinite.  This work is the first of a two-part work that contains papers presented at the 62nd International Congress of Phenomenology, The Forces of the Cosmos and the Ontopoietic Genesis of Life, held in Paris, France, August 2012. It features the work of scholars in such diverse disciplines as biology, anthropology, pedagogy, and psychology who philosophically investigate the cosmic origins of beingness. Coverage in this first part includes: Toward a New Enlightenment: Metaphysics as Philosophy of Life, Transformation in Phenomenology: Husserl and Tymieniecka, Biologically Organized Quantum Vacuum and the Cosmic Origin of Cellular Life, Plotinus "Enneads" and Self-Creation, The Creative Potential of Humor, Transcendental Morphology - A Phenomenological Interpretation of Human and Non-Human Cosmos, and Cognition and Emotion: From Dichotomy to Ambiguity.                   ¿     von Tymieniecka, Anna-Teresa

Anna-Teresa Tymieniecka (born February 28, 1923) is a Polish-born American philosopher, one of the most important and continuously active contemporary phenomenologists, founder and president of The World Phenomenology Institute, and editor (since its inception in the late 1960s) of the book series Analecta Husserliana, presently published by Springer.