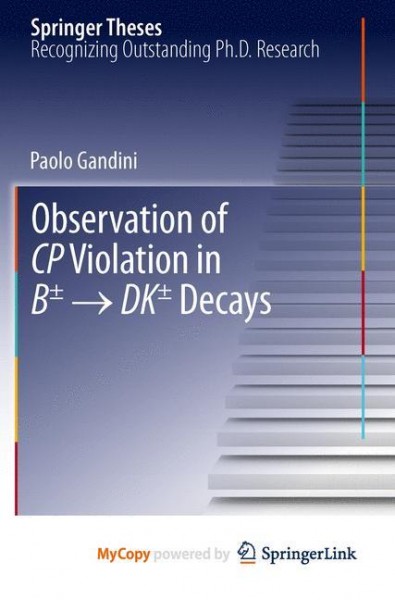 Observation of CP Violation in B± ¿ DK± Decays

Observation of CP Violation in B± ¿ DK± Decays

CP violation is a well-established phenomenon in particle physics, but until 2001 it was only observed in kaons. In the last decade, several matter-antimatter asymmetries have been observed in neutral B mesons in line with the expectations of the Standard Model of the weak interaction.  Direct CP violation is also expected in the decay rates of charged B+ mesons versus that of B- mesons, though the greatest effects are present in a decay that occurs just twice in 10 million decays. Such rarity requires huge samples to study and this is exactly what the LHC, and its dedicated B-physics experiment LHCb provide. This thesis presents an analysis of the first two years of LHCb data. The author describes the first observation of the rare decay, B- ¿ DK-, D ¿ p-K+ and the first observation of direct CP violation in this B decay. The work constitutes essential information on the experiment's measurement of a fundamental parameter of the theory and stands as a benchmark against which subsequent analyses of this type will be compared. von Gandini, Paolo

Paolo Gandini is a particle physicist mainly interested in Flavour Physics. As a member of the LHCb collaboration at CERN, he completed a D.Phil in Particle Physics at the University of Oxford with a thesis on CP violation studies in charged B decays. He is currently based at CERN as a postdoctoral researcher for Syracuse University, NY.