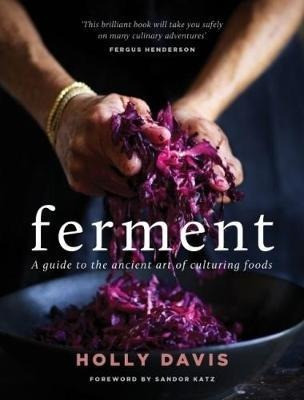 Fermented foods may have an ancient history but they are experiencing something of a renaissance right now. Kefir, kombucha, sauerkraut, yoghurts, pickles, kimchi - they are surging in popularity because of their health benefits as well as because they are fun projects for cooks who want to make things from scratch or preserve the bounty. Most commercially produced fermented foods in supermarkets have been pasteurised, killing off healthy bacteria in the process. But it's easy to incorporate some homemade fermented foods in your lifestyle, if you know how.Holly Davis has been making fermented foods since she was a teenager, using her mother's linen cupboard or any spare bench around the home to produce delicious pickles, cheeses and drinks. She's a wholefood chef, teacher and original cofounder of Iku chain of macrobiotic cafes. Holly has been practising and teaching the making of fermented foods for decades and delights in the fact that she is still learning - it's an art as much as it is a science. von Davis, Holly

Holly Davis is a teacher, caterer, cook and co-founder (and previous co-owner) of Iku wholefoods chain of cafes. Holly has been making and teaching about fermented foods for over 40 years. There's nothing she doesn't know about it. In 1999 Holly wrote Nourish: Food by Holly Davis (published by S&S in Aust, Ten Speed Press in the US). She currently runs cooking classes, works as a private and commercial chef and writes recipe and articles for liveability.com. She teaches all over Australia, but mainly in Sydney, where she lives. She collaborates with Jude Blereau teaching in Brisbane and Perth for the Whole and Natural Foods Chef Training Program.