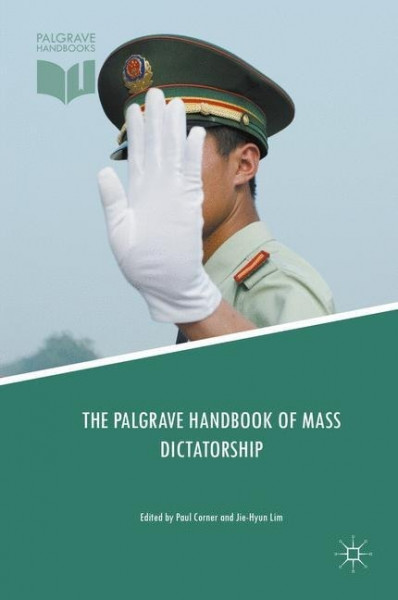 The Palgrave Handbook of Mass Dictatorship

The Palgrave Handbook of Mass Dictatorship

This book offers a fresh and original approach to the study of one of the dominant features of the twentieth century. Adopting a truly global approach to the realities of modern dictatorship, this handbook examines the multiple ways in which dictatorship functions - both for the rulers and for the ruled - and draws on the expertise of more than twenty five distinguished contributors coming from European, American, and Asian universities. While confronting the immense complexities of repression and popular response under dictatorship, the volume also poses a series of wide-ranging questions about the political organization of present-day mass society. von Corner, Paul und Lim, Jie-Hy

Professor Paul Corner is Director of the Centre for the Study of Totalitarian Regimes at the University of Siena, Italy. His most recent works include the edited volume Popular Opinion in Totalitarian Regimes (2009) and The Fascist Party and Popular Opinion in Mussolini's Italy (2012). He is a Senior Member of St. Antony's College, Oxford, UK. Professor Jie-Hyun Lim is Director of Critical Global Studies Institute at Sogang University, South Korea, and Professor of transnational history. His most recent works include the edited volume Gender Politics and Mass Dictatorship (2011), Mass Dictatorship and Memory as Ever Present Past (2014), and 'Second World War in Global Memory Space' in Michael Geyer and Adam Tooze eds., The Cambridge History of Second World War (2015).