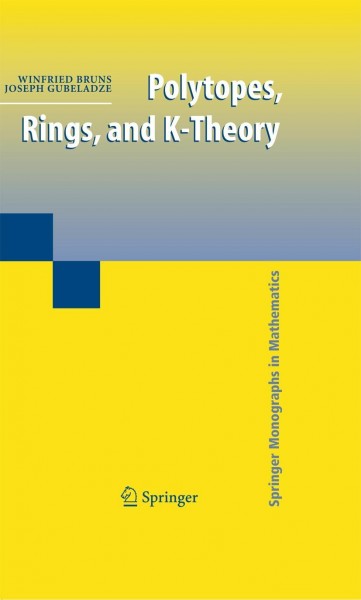 For every mathematician, ring theory and K-theory are intimately connected: al- braic K-theory is largely the K-theory of rings. At ?rst sight, polytopes, by their very nature, must appear alien to surveyors of this heartland of algebra. But in the presence of a discrete structure, polytopes de?ne a?ne monoids, and, in their turn, a?ne monoids give rise to monoid algebras. Teir spectra are the building blocks of toric varieties, an area that has developed rapidly in the last four decades. From a purely systematic viewpoint, "monoids" should therefore replace "po- topes" in the title of the book. However, such a change would conceal the geometric ?avor that we have tried to preserve through all chapters. Before delving into a description of the contents we would like to mention three general features of the book: (?) the exhibiting of interactions of convex geometry, ring theory, and K-theory is not the only goal; we present some of the central results in each of these ?elds; (?) the exposition is of constructive (i. e., algorithmic) nature at many places throughout the text-there is no doubt that one of the driving forces behind the current popularity of combinatorial geometry is the quest for visualization and computation; (?) despite the large amount of information from various ?elds, we have strived to keep the polytopal perspective as the major organizational principle. von Bruns, Winfried und Gubeladze, Joseph