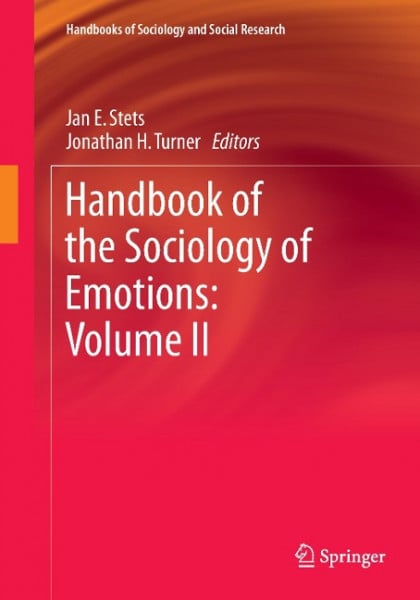 Handbook of the Sociology of Emotions: Volume II

Handbook of the Sociology of Emotions: Volume II

Handbook of the Sociology of Emotions Volume II presents all new chapters in the ever developing area of the sociology of emotions. The volume is divided into two sections: Theoretical Perspectives and Social Arenas of Emotions. It reviews major sociological theories on emotions, which include evolutionary theory, identity theory, affect control theory, social exchange theory, ritual theory, and cultural theory among others. Social arenas where emotions are examined include, but are not limited to, the economy and the workplace, the family, mental health, crime, sports, technology, social movements and the field of science. All the chapters review the major theories and research in the area and each chapter ends with some discussion of directions for future research.The Sociology of Emotions is a fast growing and vital field in the broad discipline of Sociology. This volume II follows the Handbook of the Sociology of Emotions which was first published in 2006. In 2008, this first handbook received the "Outstanding Recent Contribution" in the Emotions Section of the American Sociological Association.With contributions from leading scholars from different areas in the discipline, such as neurosociology, culture, economics, mental health, gender, social movements, discussing state-of-art theory and research on emotions in sociology this volume will generate wider appeal to the sociological community. von Stets, Jan E. und Turner, Jonathan H.

Jan E. Stets is professor of Sociology and Co-Director of the Social Psychology Research Laboratory at the University of California, Riverside. She received her PhD in sociology from Indiana University in 1987. She was assistant and associate professor at Washington State University. In 2002, she moved to the University of California, Riverside as full professor. She is past Director of the Sociology Program at the National Science Foundation, a recipient of NSF grants, a Fellow of the American Association for the Advancement of Science, a Fellow of the Society for Experimental Social Psychology, and a member of the Sociological Research Association. She is past chair of the ASA Section on Emotions and the ASA Section on Social Psychology. She is co-editing Social Psychology Quarterly. She specializes in the areas of self and identity, emotions, and morality. She is an author of several books and many research articles.Jonathan H. Turner is a professor of sociology at University of California, Riverside. After receiving his PhD from Cornell University in 1968, since the academic year 1969-1970 he has been at UCR. He has been Faculty Research Lecturer at UCR and in the profession, he has been president of the Pacific Sociological Association and California Sociological Association. He is a Fellow of the American Association for the Advancement of Science, and a member of the Sociological Research Association. He has lectured widely all over the world and he has been a visiting professor at Cambridge University, UK, Universitat Bremen, Germany, Universitat Bielefeld, German, Shandong University and Nan Kai University, Peoples Republic at China. He is known as a general theorist of sociology, although he has a number of specialties: the sociology of emotions, ethnic relations, social institutions, social stratification and bio-sociology. He is an author of many books, including textbooks and articles.