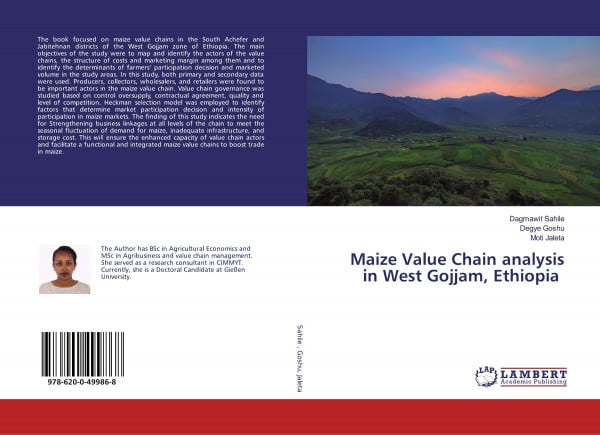 The book focused on maize value chains in the South Achefer and Jabitehnan districts of the West Gojjam zone of Ethiopia. The main objectives of the study were to map and identify the actors of the value chains, the structure of costs and marketing margin among them and to identify the determinants of farmers¿ participation decision and marketed volume in the study areas. In this study, both primary and secondary data were used. Producers, collectors, wholesalers, and retailers were found to be important actors in the maize value chain. Value chain governance was studied based on control oversupply, contractual agreement, quality and level of competition. Heckman selection model was employed to identify factors that determine market participation decision and intensity of participation in maize markets. The finding of this study indicates the need for Strengthening business linkages at all levels of the chain to meet the seasonal fluctuation of demand for maize, inadequate infrastructure, and storage cost. This will ensure the enhanced capacity of value chain actors and facilitate a functional and integrated maize value chains to boost trade in maize. von Sahile, Dagmawit und Goshu, Degye und Jaleta, Moti

The Author has BSc in Agricultural Economics and MSc in Agribusiness and value chain management. She served as a research consultant in CIMMYT. Currently, she is a Doctoral Candidate at Gießen University.