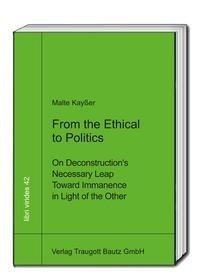 From the Ethical to Politics

And if my secret self, that which can be revealed only to the other, to the wholly other, to God if you wish, is a secret that I will never reflect on, that I will never know or experience or possess as my own, then what sense is there in saying that it is "my" secret, or in saying more generally that a secret belongs, that it is proper to or belongs to some "one", or to some other who remains someone?Derrida, The Gift of DeathBut I would make of this trans-political principle a political principle, a political rule or position taking: it is necessary also in politics to respect the secret, that which exceeds the political or that which is no longer in the juridical domain. This is what I would call the "democracy to come".Derrida, On Cosmopolitanism and Forgiveness von Kayßer, Malte