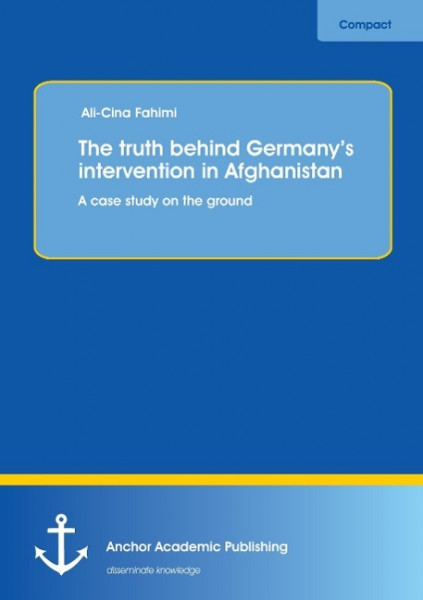 The truth behind Germany's intervention in Afghanistan: A case study on the ground

The truth behind Germany's intervention in Afghanistan: A case study on the ground

This book investigates Germany's real reasons for its involvement in the international Afghanistan intervention since 2001. The goal is to evaluate whether the main reason for the operation is defending its security by combatting international terrorism as German authorities have claimed or strengthening political and economic benefits. The research is based on an analysis of literature and official documents combined with findings from an empirical research trip to Kabul and Mazar-i-sharif in 2013. The author conducted exclusive personal interviews with high officials from the Afghan government and German authorities. The book concludes that Germany¿s decision of intervening in Afghanistan serves above all its politic economic interests. The security threat coming from Islamic terrorism can thus not be considered the main reason for the intervention. Nevertheless, the involvement in the conflict strengthened Germany¿s position in the NATO, which it regards as essential in the changing security environment. Moreover, this research revealed that the source of Germany's decision to intervene in Afghanistan was a discrepancy between elites and the public. von Fahimi, Ali-Cina

Ali Fahimi was born in 1987, immediately after his family's arrival in Germany, who sought political asylum from Afghanistan. Ali Fahimi got a Bachelor degree in Business Administration at the Nordakademie in Elmshorn. Driven by its interest for different cultures and economic systems, he lived, worked and studied in Havana and New York. Due to his passion for world politics the author did his master degree in Global Political Economy in London with focus on the war in Afghanistan. To find out the truth about Germany's interests in Afghanistan Ali Fahimi went on a research trip to Afghanistan in 2013. His political-economic knowledge together with his Afghan-German background motivated him, and permits a unique insight into Germany's role in this war.