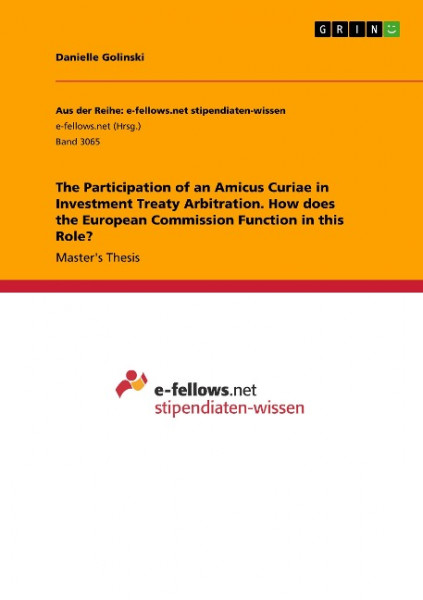 The Participation of an Amicus Curiae in Investment Treaty Arbitration. How does the European Commission Function in this Role?

The Participation of an Amicus Curiae in Investment Treaty Arbitration. How does the European Commission Function in this Role?

Master's Thesis from the year 2018 in the subject Law - Civil / Private / Trade / Anti Trust Law / Business Law, grade: 1,3, Stellenbosch Universitiy, language: English, abstract: This research paper will examine the current development of amicus curiae participation in investment arbitration and the functioning of the European Commission in this role. The need for transparency and reforms in international investment arbitration will be examined and it will be critically evaluated whether amicus participation is a suitable tool for addressing legitimacy concerns. The role of an amicus curiae in current arbitration practice will be examined as well. Various arbitration regimes and their approach to amicus participation will be evaluated. The last part of the paper will concentrate on the role of the European Commission and will examine the Commission's role as an amicus in investment disputes in practice.Within our global economy, international investments are a cornerstone. In the modern era, the favoured dispute resolution mechanism has been investment arbitration, a distinct form of international commercial arbitration, which has increased dramatically. Today, investors usually submit claims after consultations and negotiations with the host state for resolution under the auspices of an arbitral institution. Similarly, a new trend in structuring and supporting investments is the proliferation of regional arrangements in the form of Free Trade Agreements, like the North American Free Trade Agreement (NAFTA), the Comprehensive Economic and Trade Agreement between Canada and the EU (CETA) or the multi-party Energy Charter Treaty (ECT). As investment arbitration has gained more presence within the international judicial landscape, it has also been put under the scrutiny of public society. Especially during the CETA and the TTIP negotiations, a growing public concern within Europe evolved, manifesting the belief that international investment arbitration is a threat to the principles of a democratic society and could, by allowing a "secretive panel of corporate lawyers" to overrule the will of parliament and thus, destroy legal protection. These concerns led to public and academic discussions on whether the traditional principle of confidentiality should be reformed towards more transparency in international investment arbitration. The most discussed component for these reforms is the figure of an amicus curiae. von Golinski, Danielle