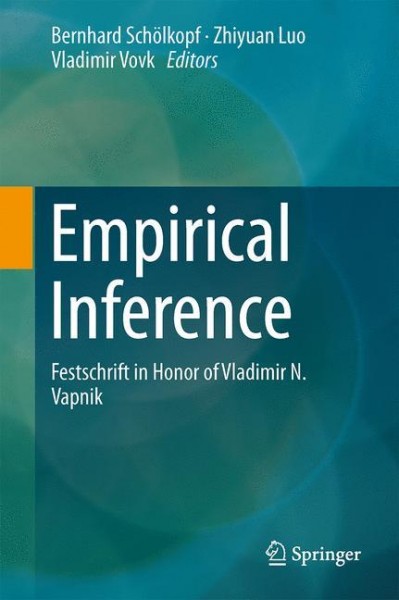 This book honours the outstanding contributions of Vladimir Vapnik, a rare example of a scientist for whom the following statements hold true simultaneously: his work led to the inception of a new field of research, the theory of statistical learning and empirical inference; he has lived to see the field blossom; and he is still as active as ever. He started analyzing learning algorithms in the 1960s and he invented the first version of the generalized portrait algorithm. He later developed one of the most successful methods in machine learning, the support vector machine (SVM) - more than just an algorithm, this was a new approach to learning problems, pioneering the use of functional analysis and convex optimization in machine learning. Part I of this book contains three chapters describing and witnessing some of Vladimir Vapnik's contributions to science. In the first chapter, Léon Bottou discusses the seminal paper published in 1968 by Vapnik and Chervonenkis that lay the foundations of statistical learning theory, and the second chapter is an English-language translation of that original paper. In the third chapter, Alexey Chervonenkis presents a first-hand account of the early history of SVMs and valuable insights into the first steps in the development of the SVM in the framework of the generalised portrait method. The remaining chapters, by leading scientists in domains such as statistics, theoretical computer science, and mathematics, address substantial topics in the theory and practice of statistical learning theory, including SVMs and other kernel-based methods, boosting, PAC-Bayesian theory, online and transductive learning, loss functions, learnable function classes, notions of complexity for function classes, multitask learning, and hypothesis selection. These contributions include historical and context notes, short surveys, and comments on future research directions. This book will be of interest to researchers, engineers, and graduate students engaged with all aspects of statistical learning. von Schölkopf, Bernhard und Luo, Zhiyuan und Vovk, Vladimir