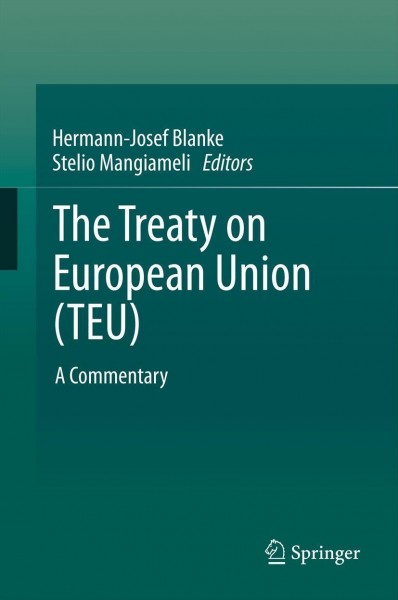 The Treaty on European Union (TEU)

The Treaty on European Union (TEU)
A Commentary

The major Commentary on the Treaty on European Union (TEU) is a European project that aims to contribute to the development of ever closer conceptual and dogmatic standpoints with regard to the creation of a "Europeanised research on Union law". This publication in English contains detailed explanations, article by article, on all the provisions of the TEU as well as on several Protocols and Declarations, including the Protocols No 1, 2 and 30 and Declaration No 17, having steady regard to the application of Union law in the national legal orders and its interpretation by the Court of Justice of the EU. The authors of the Commentary are academics from ten European states and different legal fields, some from a constitutional law background, others experts in the field of international law and EU law professionals. This should lead to more unity in European law notwithstanding all the legitimate diversity. The different traditions of constitutional law are reflected and mentioned by name thus striving for a common framework for European constitutional law. von Blanke, Hermann-Josef und Mangiameli, Stelio