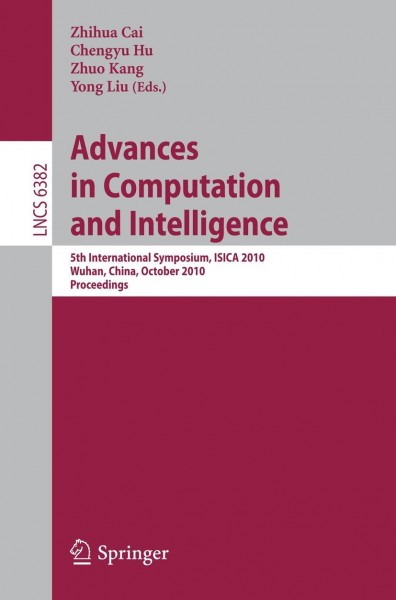 Advances in Computation and Intelligence

LNCS 6382 is the ?rst volume of the proceedings of the Fifth International Symposium on Intelligence Computation and Applications (ISICA 2010)held in Wuhan, China, October 22-24, 2010. Fifty-three papers among 267 submissions were selected and included in LNCS 6382. The symposium featured the most up-to-date research in ant colony and particle swarm optimization, di?erential evolution, distributed computing, - netic algorithms, multi-agent systems, multi-objective and dynamic optimi- tion, robot intelligence, statistical learning, and system design. LNCS 6382 is dedicated to the memory of Lishan Kang. ISICA conferences were one of the ?rst series of international conferences on computational intel- gence that combine elements of learning, adaptation, evolution and fuzzy logic to create programs as alternative solutions to arti?cial intelligence. The idea for ISICA came about after Lishan Kang organized on international symposium on evolutionary computation at Wuhan University in 2000. After he was - vited to be the Director of the School of Computer Science, China University of Geosciences, he wondered whether he could establish such discussion forums on computational intelligence at China University of Geosciences. With support from his university, the School of Computer Science organizedthe ?rst ISICA in 2005, in which some of the leading ?gures from the scienti?c computing world were invited, including H. -P. Schwefel, Germany, M. Schoenauer, France, D. J. Evans, UK, T. Higuchi, Japan, Z. Michalewicz, Australia, and X. Yao, UK. von Liu, Jingnan