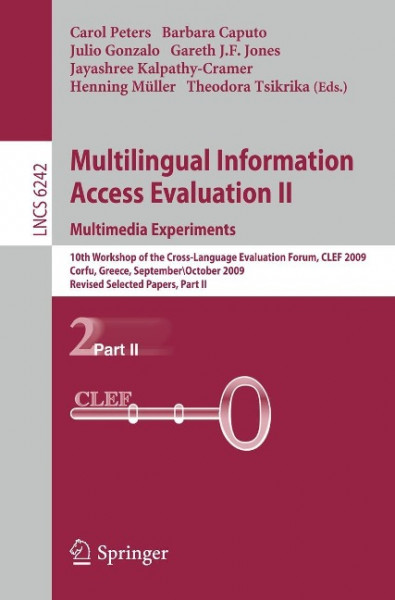 The tenth campaign of the Cross Language Evaluation Forum (CLEF) for European languages was held from January to September 2009. There were eight main eval- tion tracks in CLEF 2009 plus a pilot task. The aim, as usual, was to test the perfo- ance of a wide range of multilingual information access (MLIA) systems or system components. This year, about 150 groups, mainly but not only from academia, reg- tered to participate in the campaign. Most of the groups were from Europe but there was also a good contingent from North America and Asia. The results were presented at a two-and-a-half day workshop held in Corfu, Greece, September 30 to October 2, 2009, in conjunction with the European Conference on Digital Libraries. The workshop, attended by 160 researchers and system developers, provided the opportunity for all the groups that had participated in the evaluation campaign to get together, compare approaches and exchange ideas. von Peters, Carol und Caputo, Barbara und Gonzalo, Julio und Jones, Gareth J.F. und Kalpathy-Cramer, Jayashree und Müller, Henning und Tsikrika, Theodora