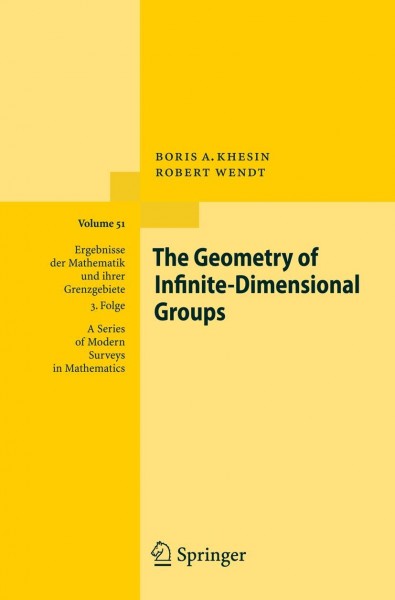 The Geometry of Infinite-Dimensional Groups

The Geometry of Infinite-Dimensional Groups

The aim of this monograph is to give an overview of various classes of in?ni- dimensional Lie groups and their applications, mostly in Hamiltonian - chanics, ?uid dynamics, integrable systems, and complex geometry. We have chosen to present the unifying ideas of the theory by concentrating on speci?c typesandexamplesofin?nite-dimensionalLiegroups. Ofcourse,theselection of the topics is largely in?uenced by the taste of the authors, but we hope thatthisselectioniswideenoughtodescribevariousphenomenaarisinginthe geometry of in?nite-dimensional Lie groups and to convince the reader that they are appealing objects to study from both purely mathematical and more applied points of view. This book can be thought of as complementary to the existing more algebraic treatments, in particular, those covering the str- ture and representation theory of in?nite-dimensional Lie algebras, as well as to more analytic ones developing calculus on in?nite-dimensional manifolds. This monograph originated from advanced graduate courses and mi- courses on in?nite-dimensional groups and gauge theory given by the ?rst author at the University of Toronto, at the CIRM in Marseille, and at the Ecole Polytechnique in Paris in 2001-2004. It is based on various classical and recentresultsthathaveshapedthisnewlyemergedpartofin?nite-dimensional geometry and group theory. Our intention was to make the book concise, relatively self-contained, and useful in a graduate course. For this reason, throughout the text, we have included a large number of problems, ranging from simple exercises to open questions.

B.Khesin's areas of research are infinite-dimensional Lie groups, integrable systems, Poisson geometry, and topological hydrodynamics. Together with Vladimir Arnold he is the author of the monograph on "Topological methods in hydrodynamics", which has bec