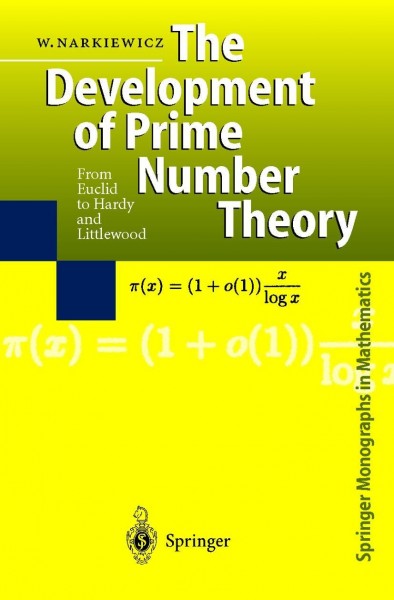 The Development of Prime Number Theory

1. People were already interested in prime numbers in ancient times, and the first result concerning the distribution of primes appears in Euclid's Elemen­ ta, where we find a proof of their infinitude, now regarded as canonical. One feels that Euclid's argument has its place in The Book, often quoted by the late Paul ErdOs, where the ultimate forms of mathematical arguments are preserved. Proofs of most other results on prime number distribution seem to be still far away from their optimal form and the aim of this book is to present the development of methods with which such problems were attacked in the course of time. This is not a historical book since we refrain from giving biographical details of the people who have played a role in this development and we do not discuss the questions concerning why each particular person became in­ terested in primes, because, usually, exact answers to them are impossible to obtain. Our idea is to present the development of the theory of the distribu­ tion of prime numbers in the period starting in antiquity and concluding at the end of the first decade of the 20th century. We shall also present some later developments, mostly in short comments, although the reader will find certain exceptions to that rule. The period of the last 80 years was full of new ideas (we mention only the applications of trigonometrical sums or the advent of various sieve methods) and certainly demands a separate book. von Narkiewicz, Wladyslaw