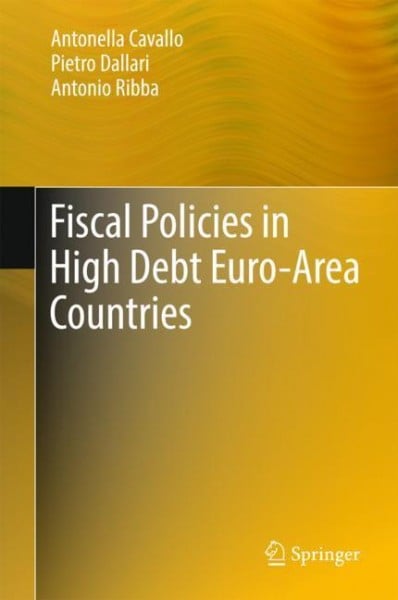 This book explores the role of national fiscal policies in a selected group of Euro-area countries under the European Economic and Monetary Union (EMU). In particular, the authors characterize the response of output to fiscal consolidations and expansions in the small Euro-area open economies affected by high public and private debt. It is shown that the macroeconomic outcome of fiscal shocks is strongly related to debt levels. The Euro-area countries included in the investigation are Greece, Ireland, Italy, the Netherlands, Spain, and Portugal, over the sample period 1999-2016, i.e., the EMU period. The main econometric tools used in this research are structural vector autoregressive (VAR) models, including panel VAR models. The available literature relating to the subject is also fully reviewed. A further closely investigated topic is the potential spillover effects of German fiscal policies on the selected small Euro-area economies. Moreover, in the perspective of the evolution of the Euro Area towards a full Monetary and Fiscal Union, the authors study the effects of area-wide government spending shocks on aggregate output and other macroeconomic variables during the EMU period. The closing chapter of the book considers evidence on the consequences of austerity policies for European labour markets during recent years. von Cavallo, Antonella und Dallari, Pietro und Ribba, Antonio

Antonella Cavallo is a PhD Candidate in Labour, Development, and Innovation at the Marco Biagi Foundation of the University of Modena and Reggio Emilia and a member of the Research Center for Public Policy Analysis. She received her MA in Economics and Public Policy, summa cum laude, at the University of Modena and Reggio Emilia. Her research interests include monetary economics and macroeconomics. Pietro Dallari is an economist in the Fiscal Affairs Department of the International Monetary Fund, Washington (USA). His research interests include business cycles, fiscal policy, and finance. He holds a PhD in Economics from Pompeu Fabra University, Barcelona (Spain). Antonio Ribba is an Associate Professor in the Department of Economics "Marco Biagi", University of Modena and Reggio Emilia (Italy). He received his PhD from the University of Bologna (Italy) in 1996. His research interests include applied macroeconomics, business cycle fluctuations, and monetary and fiscal policy.