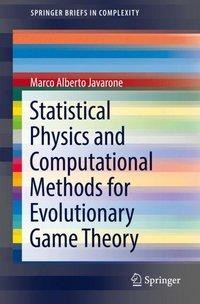 This book presents an introduction to Evolutionary Game Theory (EGT) which is an emerging field in the area of complex systems attracting the attention of researchers from disparate scientific communities. EGT allows one to represent and study several complex phenomena, such as the emergence of cooperation in social systems, the role of conformity in shaping the equilibrium of a population, and the dynamics in biological and ecological systems.Since EGT models belong to the area of complex systems, statistical physics constitutes a fundamental ingredient for investigating their behavior. At the same time, the complexity of some EGT models, such as those realized by means of agent-based methods, often require the implementation of numerical simulations. Therefore, beyond providing an introduction to EGT, this book gives a brief overview of the main statistical physics tools (such as phase transitions and the Ising model) and computational strategies for simulating evolutionary games (such as Monte Carlo algorithms on lattices).  This book will appeal to students and researchers in this burgeoning field of complex systems. von Javarone, Marco Alberto

Marco Alberto Javarone is a researcher in the area of Complex Systems and Statistical Physics, with a keen interest in interdisciplinary applications for Evolutionary Game Theory, Complex Networks, Socio-Economic Systems, and Information Theory. He graduated at Politecnico di Milano (2009), and then received two PhD's at the University of Cagliari: the former in Computer Engineering (2013), studying Complex Networks and Machine Learning, and the latter in Mathematical Physics (2017), investigating different topics within Statistical Mechanics. He worked as postdoc researcher in Italy, and as an invited researcher in France. Currently, he is a Senior Research Fellow in the School of Computer Science at the University of Hertfordshire.