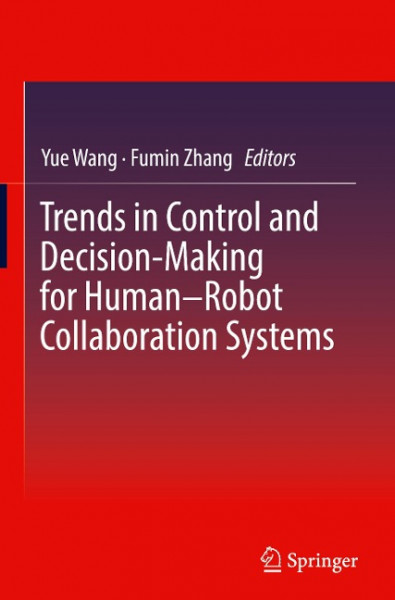 Trends in Control and Decision-Making for Human-Robot Collaboration Systems

Trends in Control and Decision-Making for Human-Robot Collaboration Systems

This book provides an overview of recent research developments in the automation and control of robotic systems that collaborate with humans. A measure of human collaboration being necessary for the optimal operation of any robotic system, the contributors exploit a broad selection of such systems to demonstrate the importance of the subject, particularly where the environment is prone to uncertainty or complexity. They show how such human strengths as high-level decision-making, flexibility, and dexterity can be combined with robotic precision, and ability to perform task repetitively or in a dangerous environment.The book focuses on quantitative methods and control design for guaranteed robot performance and balanced human experience from both physical human-robot interaction and social human-robot interaction. Its contributions develop and expand upon material presented at various international conferences. They are organized into three parts covering:one-human-one-robot collaboration;one-human-multiple-robot collaboration; andhuman-swarm collaboration.Individual topic areas include resource optimization (human and robotic), safety in collaboration, human trust in robot and decision-making when collaborating with robots, abstraction of swarm systems to make them suitable for human control, modeling and control of internal force interactions for collaborative manipulation, and the sharing of control between human and automated systems, etc. Control and decision-making algorithms feature prominently in the text, importantly within the context of human factors and the constraints they impose. Applications such as assistive technology, driverless vehicles, cooperative mobile robots, manufacturing robots and swarm robots are considered. Illustrative figures and tables are provided throughout the book.Researchers and students working in controls, and the interaction of humans and robots will learn new methods for human-robot collaboration from this book and will find the cutting edge of the subject described in depth. von Wang, Yue und Zhang, Fumi

Yue Wang received her B.S. degree in Mechanical Engineering from Shanghai University, China, in 2005 and M.S. and Ph.D. degrees in Mechanical Engineering from Worcester Polytechnic Institute in 2008 and 2011. She is an Assistant Professor in the Department of Mechanical Engineering at Clemson University. Prior to joining Clemson in 2012, she was a postdoctoral research associate in the Electrical Engineering Department at the University of Notre Dame. Her research interests include cooperative control and decision-making for human-robot collaboration systems, multi-agent systems, and control of cyber-physical systems. Dr. Wang received the National Science Foundation CAREER award and the Air Force Summer Faculty Fellowship in 2015, respectively. Her research has lead to 9 journal publications, 23 peer-reviewed conference papers, a book, and 2 book chapters. Dr. Wang is a member of IEEE, ASME, and AIAA. She is the co-chair for the IEEE Technical Committee on Manufacturing Automation and Robotic Control and organizers of several invited sessions in the American Control Conference. Fumin Zhang is Associate Professor in the School of Electrical and Computer Engineering at the Georgia Institute of Technology. He received a PhD degree in 2004 from the University of Maryland (College Park) in Electrical Engineering, and held a postdoctoral position in Princeton University from 2004 to 2007. His research interests include mobile sensor networks, maritime robotics, control systems, and theoretical foundations for cyber-physical systems. He received the NSF CAREER Award in September 2009, the Lockheed Inspirational Young Faculty Award in March 2010, the ONR Young Investigator Program Award in April 2010, and the GT Roger P. Webb Outstanding Junior Faculty Award in April 2011. He is currently serving as the co-chair for the IEEE RAS Technical Committee on Marine Robotics, and the chair for the IEEE CSS Technical Committee on Robotic Control and Manufacturing Automation.