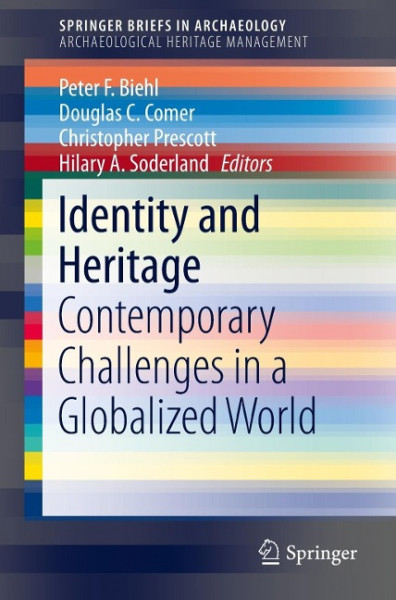 Identity and Heritage
Contemporary Challenges in a Globalized World

This book will suggest new agendas for identity and heritage studies by means of presenting contentious issues facing archaeology and heritage management in a globalized world. The book is not only present the variability of heritage objectives and experiences in the New and Old World, and opens a discussion, in a shrinking world, to look beyond national and regional contexts. If the heritage sector and archaeology are to remain relevant in our contemporary world and the near future, there are a number of questions concerning the politics, practices and narratives related to heritage and identity that must be addressed. Questions of relevance in an affluent, cosmopolitan setting are at odds with those relevant for a region emerging from civil war or ethnic strife, or a national minority battling oppression or ethnic cleansing. A premise is that heritage represents a broad scope of empirically and theoretically sound interpretations - that heritage is a response to contemporary forces, as much as data. It is therefore necessary constantly to evaluate what is scientifically accurate as well as what is valid and relevant and what can have a contemporary impact. von Biehl, Peter F.

Dr. Peter F. Biehl is a Professor of Anthropology and the current Chair of the Department of Anthropology at the University at Buffalo. He is also Director of the Institute for European and Mediterranean Archaeology (IEMA) and is an executive board member for the European Association of Archaeologists (EAA). He has developed an international Master's Program in Cultural Heritage with the Sorbonne University and teaches an introduction course to cultural heritage and an advanced course on digital heritage. He is the organizer of the interdisciplinary symposium "The Future of Heritage: Laws, Ethics and Sustainability" which is funded by the Baldy Center for Law and Social Policy of the University at Buffalo. He is the representative for the organization of the EAA meeting in Istanbul 2014 which is planned to run under topic of 'Archaeology, Heritage and Tourism'. He directs the international West Mound research project at Çatalhöyük in Turkey and supervises a PhD on heritage management in Turkey. He also co-directs the Sinking Ponds Excavation project near Buffalo, which includes a heritage management project in collaboration with the Seneca tribe. He has published widely on Neolithic and Copper Age Europe and Near East, archaeological method and theory, cognitive archaeology and the social meaning of visual imagery and representation, archaeology of cult and religion, museums and archaeological collections, and multimedia in archaeology. Dr. Douglas C. Comer is President of Cultural Site Research and Management (CSRM) and the CSRM Foundation, and Co-President of the International Committee on Archaeological Heritage Management (ICAHM) for ICOMOS. A Fulbright Scholar in cultural resource management, he served for 15 years as Chief of the United States National Park Service Applied Archaeology Center and nine years as Chair of the Maryland Governor's Advisory Committee on Archaeology. After two terms on the Board of Trustees for the United States Committee for ICOMOS (US/ICOMOS), he now represents the Society for American Archaeology (SAA) on the Board. He is Senior Editor of the Conservation and Preservation Section of the Encyclopedia of Global Archaeology, Senior Editor for the Springer Press/ICAHM publication series Multidisciplinary Perspectives in Archaeological Heritage Management, Fellow at the Whiting School of Engineering, The Johns Hopkins University, and Visiting Independent Advisor with the NASA Jet Propulsion Laboratory at Caltech (JPL/NASA). He has published extensively on archaeology, aerial and satellite remote sensing, and heritage management, and has conducted research and provided management , tourism, and interpretive planning and design at numerous archaeological sand historic sites on five continents. Dr. Christopher Prescott is Professor of Archaeology and Head-of Research at the Department of Archaeology, Conservation and History, University of Oslo, Norway, and Docent at Gothenburg's University, Sweden. He has served as section and program leader in Bergen and Oslo, as well as Head-of-Department for archaeology, conservation and art history (Oslo). From 1997 to 2002 he was dean of studies at the humanities faculty, University of Oslo. He was editor-in-chief of the Norwegian Archaeological Review from 1997 to 2001, and has edited several anthologies. He has published articles and monographs concerning Neolithic to Early Iron Age prehistory in Scandinavia and Italy, history of archaeology and theoretical and political issues. Prescott has been on the board of numerous rescue archaeological projects, and has participated in several public outreach initiatives (exhibitions, lectures, media appearances), and he has also worked on issues concerning illicit trade in antiquities and questions concerning how to train archaeologists and conduct outreach in a population becoming increasingly heterogeneous due to migration. Dr. Hilary A. Soderland directs the PhD in Law Program at the University of Washington School of Law and teaches interdisciplinary courses to law as well as social science and humanities graduate students. Specializing in archaeology, cultural heritage, and the law, Soderland received her MPhil and PhD from the University of Cambridge and her Juris Doctorate (JD) from the University of California-Berkeley's Boalt Hall School of Law. A Registered Professional Archaeologist, her publications include articles, commissioned work, and a co-edited book manuscript concerning archaeology legislation,cultural heritage law, repatriation, and archaeological resource protection and heritage management. She has been a Visiting Scholar at the American Bar Foundation in Chicago and at Tel Aviv University's Cegla Center for Interdisciplinary Research of the Law. Her museum work on three continents has encompassed curation, accessioning protocol, exhibition preparation, and legal compliance. For the Society for American Archaeology, she co-founded and served as co-chair of the Heritage Values Interest Group and she currently serves on the Committee on Ethics, the International Governmental Affairs Committee, and as a legal advisor to the Repatriation Committee. Soderland also is a manuscript reviewer and editorial board advisor for journals in the fields of anthropology, law, cultural heritage, and museology. Her professional service further includes pro bono legal work.