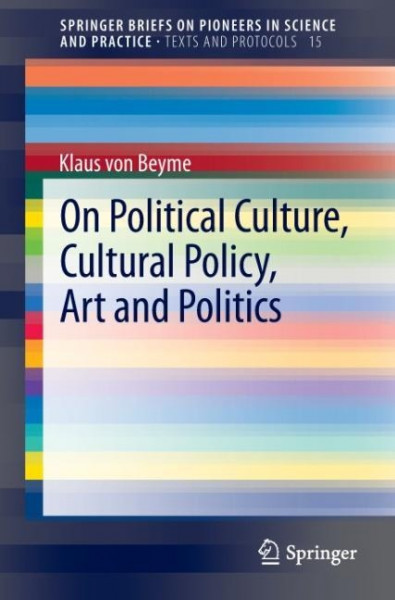 Klaus von Beyme is a distinguished German political scientist and recipient of the Mattei Dogan Award of Political Science (2012). In honour of his 80th birthday this book addresses political culture, cultural policy, art and politics. The first part on transformation theory analyses: "Historical Memories in Political Theories", "Historical Memory in Nation-Building and the Building of Ethnic Subsystems", "The Concept of Totalitarianism - A Reassessment After the Breakdown of Soviet Rule", "Political Culture - A Concept from Ideological Refutation to Acceptance in the Soviet Social Sciences", "Institutions and Political Culture in Post-Soviet Russia" and "Political and Economic Consolidation in Eastern Europe. Evidence from Empirical Data". The second part on cultural policies addresses "Why is There No Political Science of the Arts?", "Historical Memory and the Arts in the Era of the Avantgardes: Archaisme and Passéisme as a 'passéisme of the future'", and "Capital-building in Post-war Germany". von Beyme, Klaus

Beyme has repeatedly been accorded recognition for his scientific activities, amongst others, in 1995 Honorary Membership of the Humboldt University in Berlin, in 1998 the University Medal of the University of Heidelberg, and in 2001 an Honorary Doctorate from the University of Bern. Furthermore, he is a Member of the Academia Europaea and the Berlin-Brandenburg Academy of Sciences. In 2008, he was honoured with the Schader Prize. On 2 September 2010 Beyme was honoured for his "enormous contribution to the development of Political Science in Europe and the entire world" and for his many years as Professor of Political Science at different universities around the world with an Honorary Professorship at Lomonosov University in Moscow. A study in 1998 ranked Beyme in the Top Ten of the world's Political Scientists.