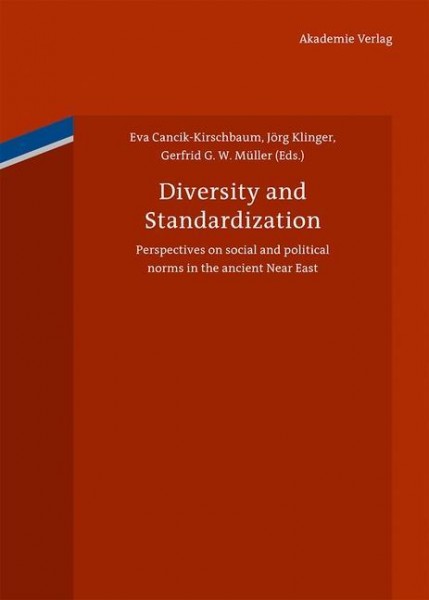 Diversity and Standardization
Perspectives on ancient Near Eastern cultural history

The ancient Near East is a construct defined by present-day scientific investigations, a construct whose temporal and spatial boundaries are fuzzy, constantly shifting under the weight of new empirical data and increasingly sophisticated analytical methods. Its objects of investigation, even those that have resided in museum collections for generations, are in flux, as the profound cultural, geographical, ethnic and social diversity of the ancient Near East threatens to drown out any points of commonality. Yet it is these points of commonality that draw us inevitably to questions of Diversity and Standardization as categories for cross-cultural and trans-historical analysis. As we look across the variegated horizons of antiquity, do these categories have any real analytical power? For instance, the introduction of a new system of measurement or bookkeeping technique or even the imposition of a standardized repertoire of pottery forms on a more-or-less subject population are all examples of the real power of processes of standardization to stabilize territorial political entities. The problem must be posed for the ancient Near East at an even more fundamental level, however: what role do concepts, methods of standardization and, more generally, sign systems play in the reconfiguration and reconstitution of cultural, political, religious, scientific and social spaces? This volume results from a symposium under the aegis of the TOPOI Research Cluster (a trans-disciplinary research center devoted to the investigation of the interdependencies between space and knowledge in the ancient world) that brought together leading archaeologists, philologists, historians and linguists in order to investigate concrete historical examples that speak to questions of Diversity and Standardization in the ancient Near East. von Cancik-Kirschbaum, Eva und Klinger, Jörg und Müller, Gerfrid G. W.