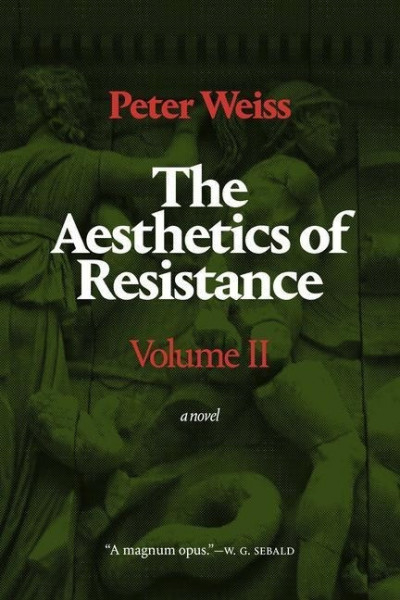 The Aesthetics of Resistance, Volume II

The Aesthetics of Resistance, Volume II
A Novel

A major literary event, the publication of the second volume of Peter Weiss's three-volume novel The Aesthetics of Resistance makes one of the towering works of twentieth-century German literature available to English-speaking readers for the first time. The crowning achievement of Peter Weiss, the internationally renowned writer best known for his play Marat/Sade, The Aesthetics of Resistance spans the period from the late 1930s to World War II, dramatizing antifascist resistance and the rise and fall of proletarian political parties in Europe. Volume II, initially published in 1978, opens with the unnamed narrator  in Paris after having retreated from the front lines of the Spanish Civil War. From there, he moves on to Stockholm, where he works in a factory, becomes involved with the Communist Party, and meets Bertolt Brecht. Featuring the narrator's extended meditations on paintings, sculpture, and literature, the novel teems with characters, almost all of whom are based on historical figures. Throughout, the narrator explores the affinity between political resistance and art--the connection at the heart of Weiss's novel. Weiss suggests that meaning lies in embracing resistance, no matter how intense the oppression, and that we must look to art for new models of political action and social understanding. The Aesthetics of Resistance is one of the truly great works of postwar German literature and an essential resource for understanding twentieth-century German history. von Weiss, Peter und Scott, Joel

Peter Weiss (1916-1982) was a German playwright, novelist, filmmaker, and painter. His works include the plays The New Trial, also published by Duke University Press, and Marat/Sade, and the novels The Shadow of the Body of the Coachman and The Conversation of the Three Walkers. He received West Germany's most important literary award, the Georg Büchner Prize, posthumously in 1982. Joel Scott is a freelance translator, editor, and writer. He is the author of two poetry chapbooks: Bildverbot and Diary Farm.