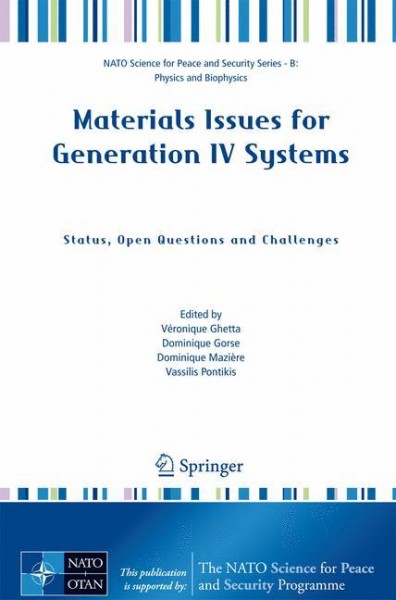 Global warming, shortage of low-cost oil resources and the increasing demand for energy are currently controlling the world's economic expansion while often opposing desires for sustainable and peaceful development. In this context, atomic energy satisfactorily fulfills the criteria of low carbon gas production and high overall yield. However, in the absence of industrial fast-breeders the use of nuclear fuel is not optimal, and the production of high activity waste materials is at a maximum. These are the principal reasons for the development of a new, fourth generation of nuclear reactors, minimizing the undesirable side-effects of current nuclear energy production technology while increasing yields by increasing operation temperatures and opening the way for the industrial production of hydrogen through the decomposition of water.The construction and use of such reactors is hindered by several factors, including performance limitations of known structural materials, particularly if the life of the projected systems had to extend over the periods necessary to achieve low costs (at least 60 years).This book collects lectures and seminars presented at the homonymous NATO ASI held in autumn 2007 at the Institut d'Etudes Scientifiques in Cargèse, France. The adopted approach aims at improving and coordinating basic knowledge in materials science and engineering with specific areas of condensed matter physics, the physics of particle/matter interaction and of radiation damage. It is our belief that this methodology is crucially conditioning the development and the industrial production of new structural materials capable of coping with the requirements of these future reactors. von Ghetta, Véronique und Gorse, Dominique und Mazière, Dominique und Pontikis, Vassilis