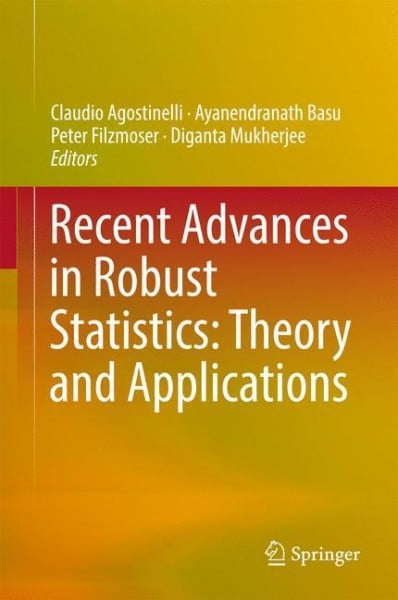 This book offers a collection of recent contributions and emerging ideas in the areas of robust statistics presented at the International Conference on Robust Statistics 2015 (ICORS 2015) held in Kolkata during 12-16 January, 2015. The book explores the applicability of robust methods in other non-traditional areas which includes the use of new techniques such as skew and mixture of skew distributions, scaled Bregman divergences, and multilevel functional data methods; application areas being circular data models and prediction of mortality and life expectancy. The contributions are of both theoretical as well as applied in nature. Robust statistics is a relatively young branch of statistical sciences that is rapidly emerging as the bedrock of statistical analysis in the 21st century due to its flexible nature and wide scope. Robust statistics supports the application of parametric and other inference techniques over a broader domain than the strictly interpreted model scenarios employed in classical statistical methods.The aim of the ICORS conference, which is being organized annually since 2001, is to bring together researchers interested in robust statistics, data analysis and related areas. The conference is meant for theoretical and applied statisticians, data analysts from other fields, leading experts, junior researchers and graduate students. The ICORS meetings offer a forum for discussing recent advances and emerging ideas in statistics with a focus on robustness, and encourage informal contacts and discussions among all the participants. They also play an important role in maintaining a cohesive group of international researchers interested in robust statistics and related topics, whose interactions transcend the meetings and endure year round. von Agostinelli, Claudio und Basu, Ayanendranath und Filzmoser, Peter und Mukherjee, Diganta

CLAUDIO AGOSTINELLI is associate professor of statistics at the Department of Mathematics, University of Trento, Italy. He received his Ph.D. in statistics from the University of Padova, Italy, in 1998. Prior to joining the University of Trento, he was associate professor at the Department of Environmental Sciences, Informatics and Statistics, Ca' Foscari University of Venice, Italy. His principal area of research is robust statistics. He also works in statistical data depth, circular statistics and computational statistics with applications to paleoclimatology and environmental sciences. He has published over 35 research articles in international refereed journals. He is associate editor of Computational Statistics. He is member of the ICORS steering committee. AYANENDRANATH BASU is professor at the Interdisciplinary Statistical Research Unit of the Indian Statistical Institute, Kolkata, India. He received his M.Stat. from the Indian Statistical Institute in 1986, and his Ph.D. in statistics from the Pennsylvania State University in 1991. Prior to joining the Indian Statistical Institute, he was assistant professor at the Department of Mathematics, University of Texas at Austin, U.S.A. Apart from his primary interest in robust minimum distance inference, his research areas include applied multivariate analysis, categorical data analysis, statistical computing and biostatistics. He has published over 90 research articles in international refereed journals, has authored and edited several books and book chapters. He is a recipient of the C.R. Rao National Award in Statistics given by the Government of India. He is a Fellow of the National Academy of Sciences, India, and the West Bengal Academy of Science and Technology. He is a past editor of Sankhya, The Indian Journal of Statistics, Series B. PETER FILZMOSER studied applied mathematics at the Vienna University of Technology, Austria, where he also wrote his doctoral thesis and habilitation. His research led him to the area of robust statistics, resulting in many international collaborations and various scientific papers in this area. He has been involved in organizing several scientific events devoted to robust statistics, including the first ICORS conference in 2001 in Austria. Since 2001, he has been a professor in the Department of Statistics at the Vienna University of Technology, Australia. He was a visiting professor at the Universities of Vienna, Toulouse, and Minsk. He has published over 100 research articles, authored 5 books and edited several proceedings volumes and special issues of scientific journals. He is elected member of the International Statistical Institute. Dr. Diganta Mukherjee holds B.Stat., M.Stat., and Ph.D (Economics) degrees all from the Indian Statistical Institute. His research interests are Welfare & Development Economics and Finance. He is an ex-faculty of the Jawaharlal Nehru University, Essex University, and the ICFAI Business School. He is now a faculty at the Indian Statistical Institute. He has over 60 publications in national and international journals and has authored three books.He has been involved in projects with large corporate houses and various ministries of Govt. of India (GoI) and West Bengal Govt. He is acting as a technical advisor to MCX, RBI, SEBI, NSSO, and NAD (CSO).