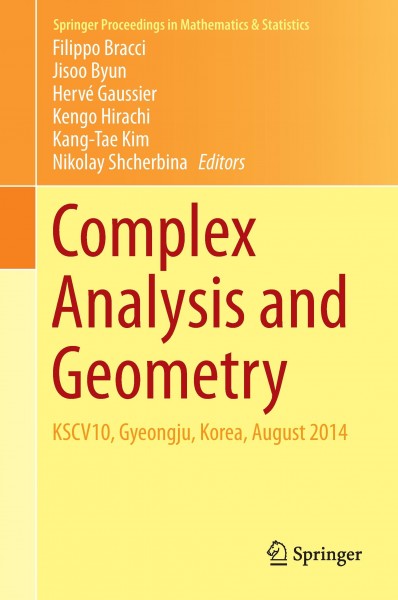 This volume includes 28 chapters by authors who are leading researchers of the world describing many of the up-to-date aspects in the field of several complex variables (SCV). These contributions are based upon their presentations at the 10th Korean Conference on Several Complex Variables (KSCV10), held as a satellite conference to the International Congress of Mathematicians (ICM) 2014 in Seoul, Korea.SCV has been the term for multidimensional complex analysis, one of the central research areas in mathematics. Studies over time have revealed a variety of rich, intriguing, new knowledge in complex analysis and geometry of analytic spaces and holomorphic functions which were "hidden" in the case of complex dimension one. These new theories have significant intersections with algebraic geometry, differential geometry, partial differential equations, dynamics, functional analysis and operator theory, and sheaves and cohomology, as well as the traditional analysis of holomorphic functions in all dimensions.This book is suitable for a broad audience of mathematicians at and above the beginning graduate-student level. Many chapters pose open-ended problems for further research, and one in particular is devoted to problems for future investigations. von Bracci, Filippo und Byun, Jisoo und Gaussier, Herve und Hirachi, Kengo und Kim, Kang-Tae und Shcherbina, Nikolay