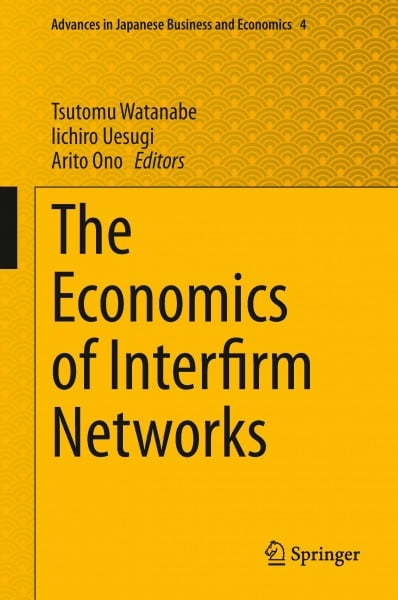 The Economics of Interfirm Networks

The Economics of Interfirm Networks

This book is one of the first comprehensive works to fill the knowledge gap resulting from the limited number of empirical studies on interfirm networks. The in-depth empirical research presented here is based on a massive transaction relationship database of approximately 400,000 Japanese firms. This volume, unlike others, focuses on the role of interfirm networks in three different fields: (1) macroeconomic activities, (2) economic geography and firm dynamics, and (3) firm-bank relationships. The database for this work is constructed in collaboration with Japan's largest credit research company, Teikoku Data Bank, and covers a substantial portion of Japanese firms with information on firms' transaction partners, shareholders, financial institutions, and other attributes, including their locations and performance.Networks prevail in many aspects of economic activities and play a major role in explaining a wide variety of economic phenomena from business cycles to knowledge spillovers, which has motivated economists to produce a number of excellent works.  In the policy arena, there has been a growing concern on the vulnerabilities of networks based on the casual observation that idiosyncratic shocks on firms can be amplified through inter-firm connections and leads to a systemic crisis. Typical examples are the manufacturing supply-chain networks in the automobile and electronics industries which propagated regionally concentrated shocks (the Great East Japan Earthquake and floods in Thailand in 2011) into global ones. An abundance of theoretical literature on the formation and functions of networks is available already.This book breaks new ground, however, and provides an excellent opportunity for the reader to gain a more integrated understanding of the role of networks in the economy. The Economics of Interfirm Networks will be of special interest to economists and practitioners seeking empirical and quantitative knowledge on interfirm and firm-bank networks. von Watanabe, Tsutomu und Uesugi, Iichiro und Ono, Arito

Tsutomu Watanabe has been a professor of economics at the Graduate School of Economics, The University of Tokyo, since October 2011. He has also been a professor at Hitotsubashi University (1999-2011) and a senior economist at the Bank of Japan (1982-1999). He has held visiting positions at various universities, including Kyoto University, Bocconi University, and Columbia University. He received his Ph.D. in economics from Harvard University in 1992 and did his undergraduate work at The University of Tokyo. Watanabe's main research area is monetary policy and inflation dynamics. He is known for his series of papers on monetary policy when nominal interest rates are bounded at zero; in particular, his paper on the optimal monetary policy at the zero lower bound, whose first draft appeared in 2001 and final version was published in 2005, has been widely recognized as the first paper to provide a simple description of the liquidity trap and characterize the optimal policy response to it in a setting of dynamic stochastic general equilibrium. He is an author of many books and more than 40 academic journal articles on monetary policy and international finance.  Iichiro Uesugi is an associate professor at the Institute of Economic Research of Hitotsubashi University, Japan. He received his M.A. and Ph.D. in economics in 2000 from the University of California, San Diego. Prior to becoming a member of the faculty of Hitotsubashi University in 2011, he joined the Ministry of Economy, Trade and Industry (METI) in 1993 and worked in the Economic Policy Unit of the Minister's Secretariat, Macroeconomic Affairs Division; the Planning Division of the Coal Department in the Agency of Natural Resources and Energy; the Research Division of the Small and Medium Enterprises Agency; and the Research Institute of Economy, Trade and Industry. His research interests focus on firm dynamics, financial intermediation, and the Japanese economy. His research has been published in a number of scholarly journals including the Journal of Money, Credit, and Banking, the Journal of Banking & Finance, and the Journal of the Japanese and International Economies. Arito Ono is a professor at the Department of Banking and Corporate Finance, Faculty of Commerce, Chuo University, Japan. Prior to joining Chuo University in 2015, he was a senior economist at the Mizuho Research Institute, and a senior economist at the Institute for Monetary and Economic Studies, Bank of Japan (2009-2011). He has also been a member of several working groups at the Financial System Council, Financial Services Agency (2011-2015). His main fields of research are banking and corporate finance, and he has published papers in the Journal of Money, Credit, and Banking, the Journal of Banking & Finance, and the Journal of Financial Stability, among others. He received a B.A. in economics from the University of Tokyo and a Ph.D. in economics from Brown University.