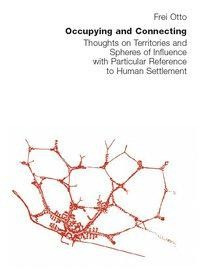 Cities, estates and routing systems develop, change constantly and fundamentally cannot be planned. Claims to ownership, land and building regulations, planning decisions and political interventions make it difficult for settlement structures to adapt to constantly changing requirements to such an extent that meaningful and totally ecological use of the surface of the earth is becoming increasingly difficult, although new techniques and flexible planning models mean that a connection could be found with the self-designing processes of urban-development history. Plants are anchored in their location on the face of the earth, animals and human beings have mobile territory and encampments that become static with increasing density. Human settlements are organisms, but they are not hereditarily anchored in their form like corals, sponges or beehives. They often grow and shrink at the same time. Their form can almost never be called chaotic. Typical self-formation processes lead to astonishing genetic optimization in the course of time. Processes of change have become so rapid today that current urban-planning theories have been overtaken. But high effectiveness of self-created, in other words unplanned settlements in terms of energy and biology is totally achievable today in »natural« town and transport planning and leads to ecologically meaningful solutions that are also full of beauty. The study was written in the context of special research into »natural constructions« by the Deutsche Forschungsgemeinschaft, and has hitherto been available only in German and as a working paper for circulation between those involved in the research project. Frei Otto is one of the 20th-century's most important architectural visionaries. Although at a first glance his buildings like the German Pavilion for the 1967 World Fair in Montreal, designed with Rolf Gutbrod, the roofs for the Olympic buildings in Munich designed by Günter Behnisch or the project developed with Christoph Ingenhoven for a new main station in Stuttgart seem to be in the tradition only of the great constructors of this century like Felix Candela or Pier Luigi Nervi, his work goes way beyond mere construction. He is a technician, artist and philosopher in one, and his central concern is for a new and all-embracing link with nature in building. von Frei, Otto und Robinson, Michael