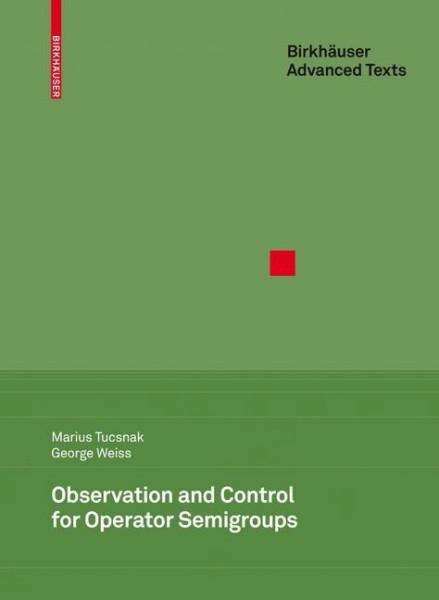 Observation and Control for Operator Semigroups

Observation and Control for Operator Semigroups

The evolution of the state of many systems modeled by linear partial di?erential equations (PDEs) or linear delay di?erential equations can be described by ope- torsemigroups.Thestate ofsucha systemis anelementin anin?nite-dimensional normed space, whence the name "in?nite-dimensional linear system". The study of operator semigroups is a mature area of functional analysis, which is still very active. The study of observation and control operators for such semigroups is relatively more recent. These operators are needed to model the - teraction of a system with the surrounding world via outputs or inputs. The main topicsofinterestaboutobservationandcontroloperatorsareadmissibility,obse- ability, controllability, stabilizability and detectability. Observation and control operators are an essential ingredient of well-posed linear systems (or more gen- ally system nodes). In this book we deal only with admissibility, observability and controllability. We deal only with operator semigroups acting on Hilbert spaces. This book is meant to be an elementary introduction into the topics m- tioned above. By "elementary" we mean that we assume no prior knowledge of ?nite-dimensional control theory, and no prior knowledge of operator semigroups or of unbounded operators. We introduce everything needed from these areas. We do assume that the reader has a basic understanding of bounded operators on Hilbert spaces, di?erential equations, Fourier and Laplace transforms, dist- butions and Sobolev spaces on n-dimensional domains. Much of the background needed in these areas is summarized in the appendices, often with proofs. von Tucsnak, Marius