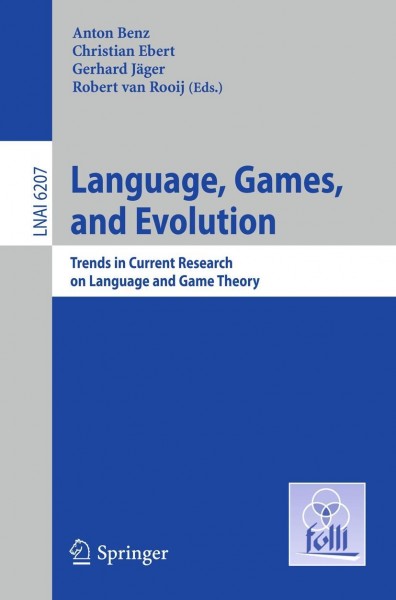 Language, Games, and Evolution
Trends in Current Research on Language and Game Theory

Recent years witnessed an increased interest in formal pragmatics and especially the establishment of game theory as a new research methodology for the study of language use. Game and Decision Theory (GDT) are natural candidates if we look for a theoretical foundation of linguistic pragmatics. Over the last decade, a firm research community has emerged with a strong interdisciplinary character, where economists, philosophers, and social scientists meet with linguists. Within this field of research, three major currents can be distinguished: one is closely related to the Gricean paradigm and aims at a precise foundation of pragmatic reasoning, the second originates in the economic literature and is concerned with the role of game theory in the context of language use, and the third aims at language evolution seen either from a biological or from a cultural perspective. Edited in collaboration with FoLLI, the Association of Logic, Language and Information, this volume is based on a selection of papers of two international conferences, one organised at ESSLLI in 2007 on language, games, and evolution, and the other organised at the ZAS in Berlin on games and decisions in pragmatics in 2008. This volume is rounded off by additional invited papers and now contains eight articles of leading researchers in the field which together provide a state-of-the-art survey of current research on language evolution and game theoretic approaches to pragmatics. von Benz, Anton und Ebert, Christian und Jäger, Gerhard und van Rooij, Robert