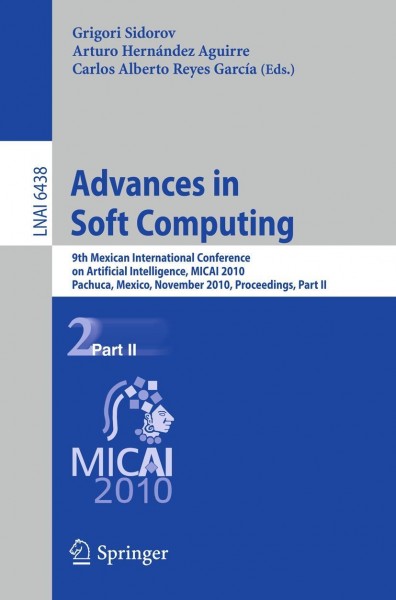 Artificial intelligence (AI) is a branch of computer science that models the human ability of reasoning, usage of human language and organization of knowledge, solving problems and practically all other human intellectual abilities. Usually it is characterized by the application of heuristic methods because in the majority of cases there is no exact solution to this kind of problem. Soft computing can be viewed as a branch of AI that deals with the problems that explicitly contain incomplete or complex information, or are known to be impossible for direct computation, i.e., these are the same problems as in AI but viewed from the perspective of their computation. The Mexican International Conference on Artificial Intelligence (MICAI), a yearly international conference series organized by the Mexican Society for Artificial Intelligence (SMIA), is a major international AI forum and the main event in the academic life of the country's growing AI community. In 2010, SMIA celebrated 10 years of activity related to the organization of MICAI as is represented in its slogan "Ten years on the road with AI". MICAI conferences traditionally publish high-quality papers in all areas of artificial intelligence and its applications. The proceedings of the previous MICAI events were also published by Springer in its Lecture Notes in Artificial Intelligence (LNAI) series, vols. 1793, 2313, 2972, 3789, 4293, 4827, 5317, and 5845. Since its foundation in 2000, the conference has been growing in popularity and improving in quality. von Sidorov, Grigori und Hernández Aguirre, Arturo und Reyes Garcia, Carlos Alberto