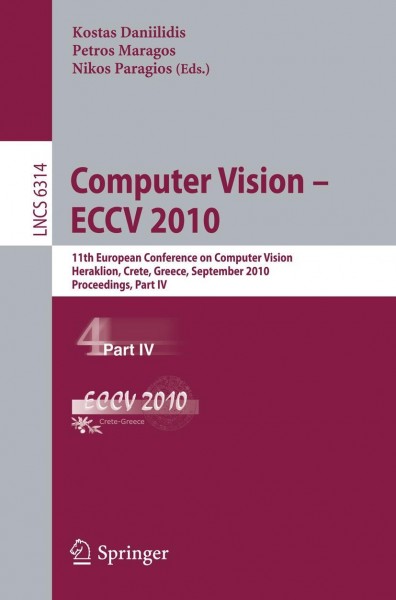 The 2010 edition of the European Conference on Computer Vision was held in Heraklion, Crete. The call for papers attracted an absolute record of 1,174 submissions. We describe here the selection of the accepted papers: Thirty-eight area chairs were selected coming from Europe (18), USA and Canada (16), and Asia (4). Their selection was based on the following criteria: (1) Researchers who had served at least two times as Area Chairs within the past two years at major vision conferences were excluded; (2) Researchers who served as Area Chairs at the 2010 Computer Vision and Pattern Recognition were also excluded (exception: ECCV 2012 Program Chairs); (3) Minimization of overlap introduced by Area Chairs being former student and advisors; (4) 20% of the Area Chairs had never served before in a major conference; (5) The Area Chair selection process made all possible efforts to achieve a reasonable geographic distribution between countries, thematic areas and trends in computer vision. Each Area Chair was assigned by the Program Chairs between 28-32 papers. Based on paper content, the Area Chair recommended up to seven potential reviewers per paper. Such assignment was made using all reviewers in the database including the conflicting ones. The Program Chairs manually entered the missing conflict domains of approximately 300 reviewers. Based on the recommendation of the Area Chairs, three reviewers were selected per paper (with at least one being of the top three suggestions), with 99. von Daniilidis, Kostas und Maragos, Petros und Paragios, Nikos